It turns out that the crypto market hasn’t gotten sick of canine-themed meme coins just yet.

Self-claimed “DOGE killer” shiba inu (SHIB) has pumped by nearly 400% in the past week, pushing the token to the No. 13 most valued cryptocurrency by market capitalization, according to data compiled by CoinGecko.

The seemingly odd price pop of one random coin among thousands of others has had some crypto traders scratching their heads: why SHIB and why now?

Despite a popular narrative that electric car maker Tesla’s CEO Elon Musk may have accidentally pumped the price, blockchain data shows that the seemingly irrational rally may be prompted by moves by SHIB “whales,” who hold large amounts of SHIB, which were followed by retail traders, or the so-called SHIBArmy.

Data from blockchain data firm Santiment shows that the number of SHIB transactions worth more than $1 million has been going up dramatically along with the price rally.

A wallet-tracking Twitter account also captured a whale purchase of more than 6 trillion SHIB on Sept. 30, just a few days ahead of the skyrocketing price move. 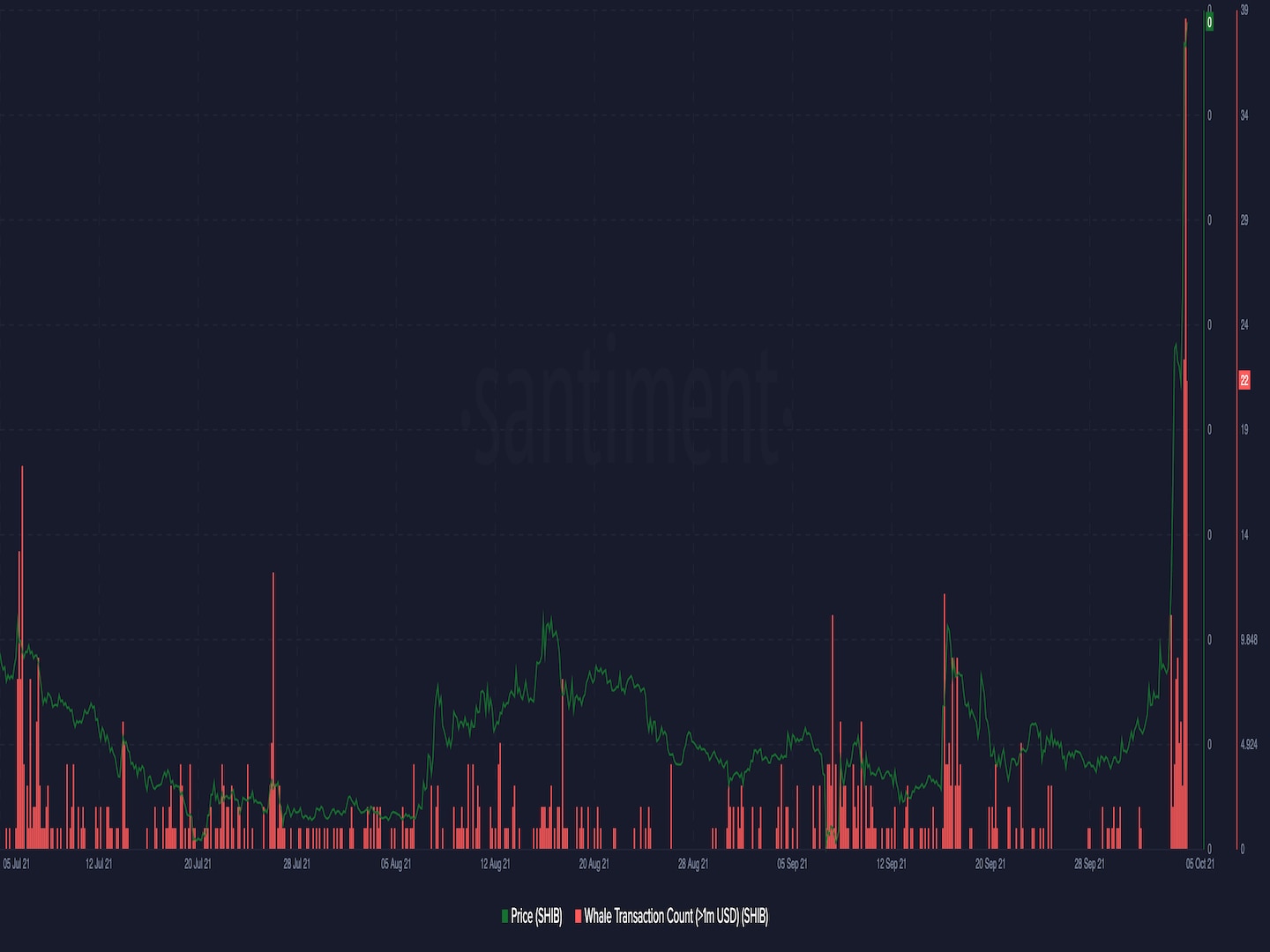 CoinDesk reached out to Wintermute for comment about the SHIB pump, but the firm did not return requests for comment by press time.

While the whale moves on SHIB may give a glimpse of how the pump may have been triggered, the high amount of whale transactions may not be the best news for SHIBArmy because according to Santiment, it often coincides with a local price top.

On the retail trading side, data provided by blockchain analytics firm Kaiko shows that trading volume across the eight most liquid SHIB/USDT markets all went up on Oct. 4 around 13:00 UTC and 20:00 UTC, and then on Oct. 5 at 14:00 UTC.

According to Clara Medalie, Kaiko’s research lead, trading volume on different exchanges trending in the same direction is common because markets are integrated and overlapping. As a result, the trading data of SHIB/USDT pairs on the eight centralized exchanges cannot give an answer to where and when the pump began. 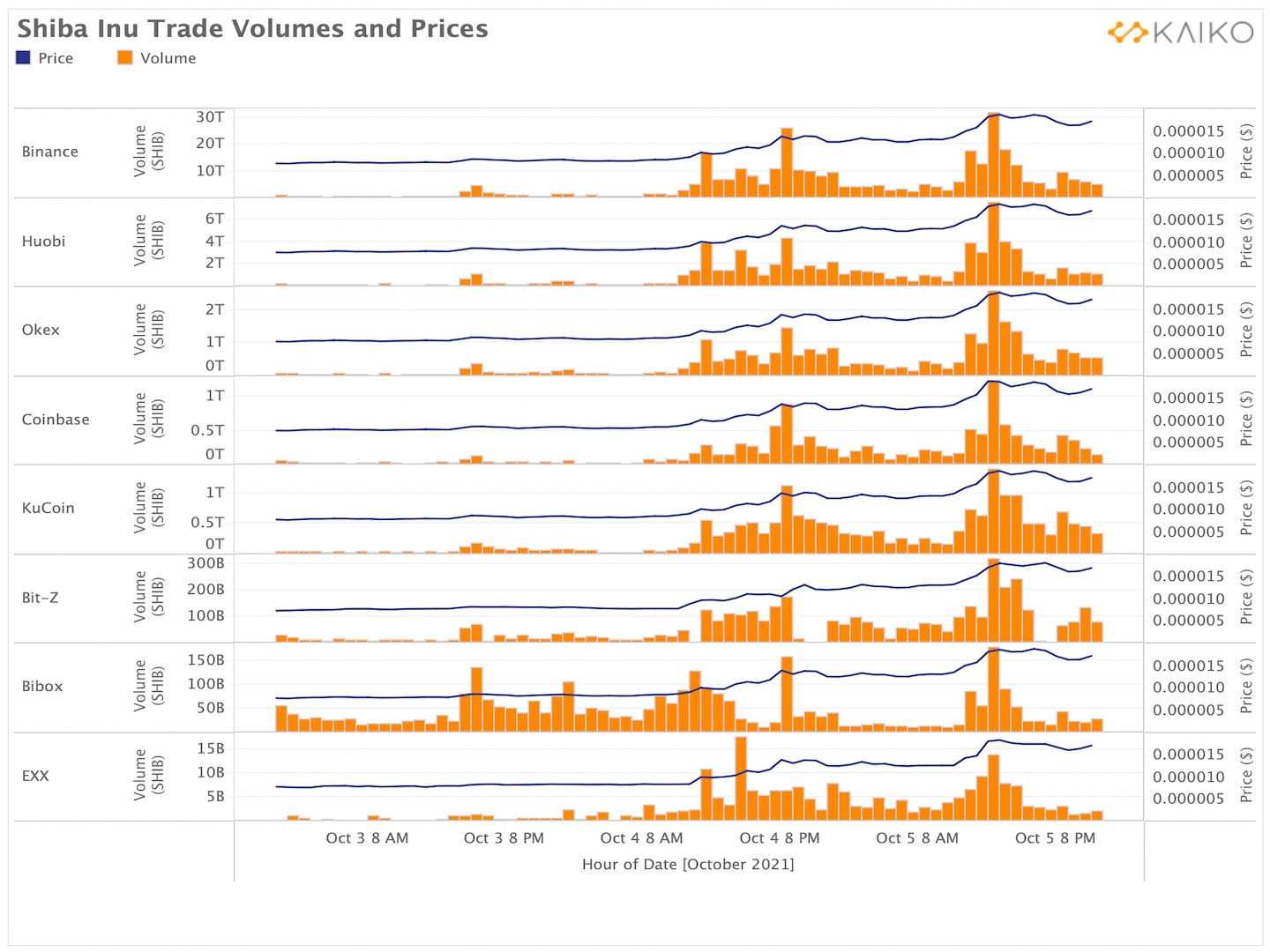 The conclusion is also supported by data on two trading pairs involving SHIB on a single exchange, Coinbase, according to Dessislava Aubert, a research analyst at Kaiko.

On Coinbase, the average trade size rose for both SHIB/USD (crypto-to-fiat) and SHIB/USDT (crypto-to-crypto) pairs, suggesting that the token’s popularity is built on “a broad client base” from both crypto natives and newbies.

While the data does not give an answer to where the pump started, the timeline of the pump shows that the rally may have little to do with Tesla CEO Elon Musk’s tweet about his dog Floki, which was posted on Oct. 4 at 1:41 UTC.

Since SHIB started pumping, there’s been a popular narrative that the tweet by Musk, a billionaire who’s known for his love of dogecoin, has triggered SHIB’s crazy gains.

“I’m not 100% sure what may have triggered [the pump], probably [investors] just got more comfortable once the whole market started to climb,” said Lucas Outumuro, head of research at IntoTheBlock.

Chats from SHIB’s Telegram group and Reddit community are filled with messages encouraging readers to buy more SHIB and hold it, with speculations that online brokerage app Robinhood may support the meme coin soon.

A representative from Robinhood said the company had “no comment” on the rumor.

Despite the gain, the token’s price is still down a little from its record high in May after the token was listed on a few major exchanges. With the surging market capitalization of the canine-themed coin, SHIB’s rise also came as its total supply started shrinking.

Besides the tokens that were donated to charities, Buterin had sent more than 410 trillion SHIB to a dead blockchain address, taking them out of circulation.

According to a Medium post by one of the team members, the SHIB project will deploy a number of non-fungible token (NFT) drops in the coming days, which will include a new token-burning mechanism.

“If everyone names their Shiboshis that will be a $1 MILLION dollar burn,” the post said.

According to Etherscan, the biggest holder of SHIB is an address marked as “Black Hole” that’s been only receiving SHIB tokens. It is also the address used by Buterin to burn his SHIB tokens.

At press time, there are just around 497 trillion SHIB circulating on the market, according to CoinGecko, with a total token supply of 1 quadrillion.