Bitcoin’s price dipped below $57,000 on Tuesday as analysts said the extreme buying in the market could mean the rally may soon be running out of steam.

They pointed to the bitcoin Fear & Greed Index, which entered “extreme greed” territory last week and is at the highest level since early September, which preceded a sharp sell-off in bitcoin.

Comments from J.P. Morgan CEO Jamie Dimon at a conference on Monday contributed to a sour mood across crypto markets. Dimon stated that governments will regulate bitcoin, which he personally thinks is “worthless.”

On the regulatory front, “China’s domestic energy and power crunch has led to increased scrutiny of mining projects in various regions, such as the seizure of idle mining machines in inner Mongolia,” WuBlockchain wrote in a Monday newsletter.

Some analysts consider the recent rally in crypto prices is being driven by continued speculation the U.S. Securities and Exchange Commission (SEC) will finally approve a bitcoin exchange-traded fund (ETF), although others are skeptical an approval will have a beneficial effect on bitcoin’s price.

“The market is over-emphasizing (SEC Chairman) Gary Gensler’s public comments about support for the [Chicago Mercantile Exchange] and futures,” Jeff Dorman, chief investment officer at Arca, a digital asset management firm, in an email to CoinDesk. “We believe the concerns the SEC has raised historically regarding market manipulation of bitcoin and unregulated exchanges have not been solved.”

Transaction activity on the rise

Increasing transaction activity on the Bitcoin blockchain could point to fresh buying demand this quarter, according to data compiled by Glassnode.

“Active entities, the count of individual participants on-chain each day, has grown 19% to this week, reaching around 291K active entities per day,” Glassnode wrote in a blog post. “More active market participants have historically correlated with growing interest in the asset during early stage bull markets.”

The value and size of transactions are also increasing, which could mean large buyers are starting to accumulate BTC after the sell-off last month. 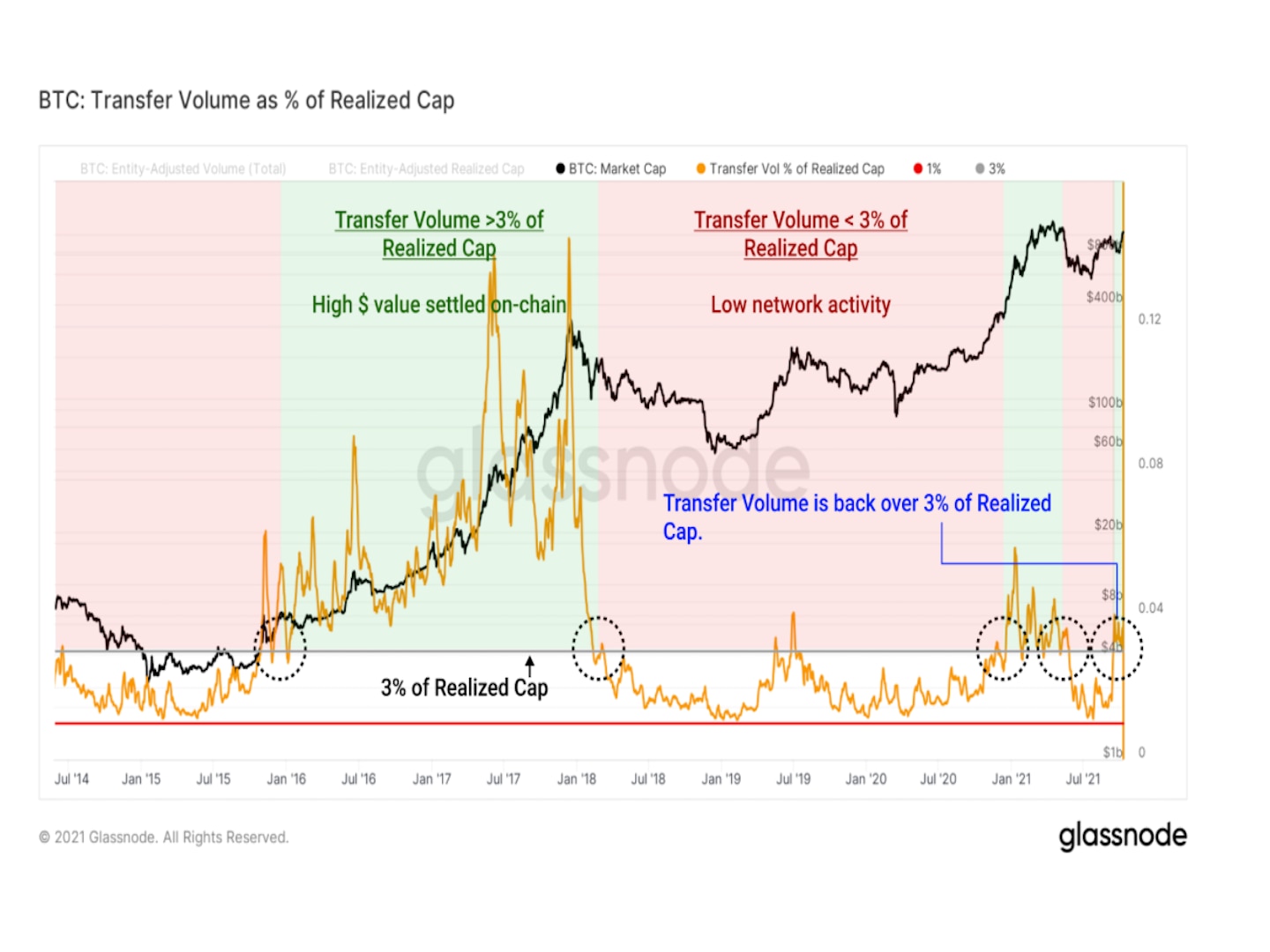 “The increasing bitcoin price coupled with a stagnating hashrate (blockchain computing power) has made 2021 a very lucrative year for bitcoin miners,” Arcane Research wrote in a Tuesday report.

Bitcoin mining profitability accelerated during the first days of October, which also led to a brief rise in some miner share prices, although performance is mixed. Marathon Digital (NASDAQ: MARA) stock is up about 64% over the past three months, compared to an 11% decline in Riot Blockchain (NASDAQ: RIOT) and a 69% rise in BTC during the same period.

“It’s essential to keep in mind that these calculations don’t consider all the costs of bitcoin mining, only the operational,” Arcane wrote, which means miners will need to sustain margin growth.

“As more miners come online it gets harder to access hardware and hosting so those costs go up, competition and profitability starts coming down and only the large-scale miners are able to survive long term,” Fred Thiel, CEO of Marathon Digital Holdings, said during an interview with CoinDesk. 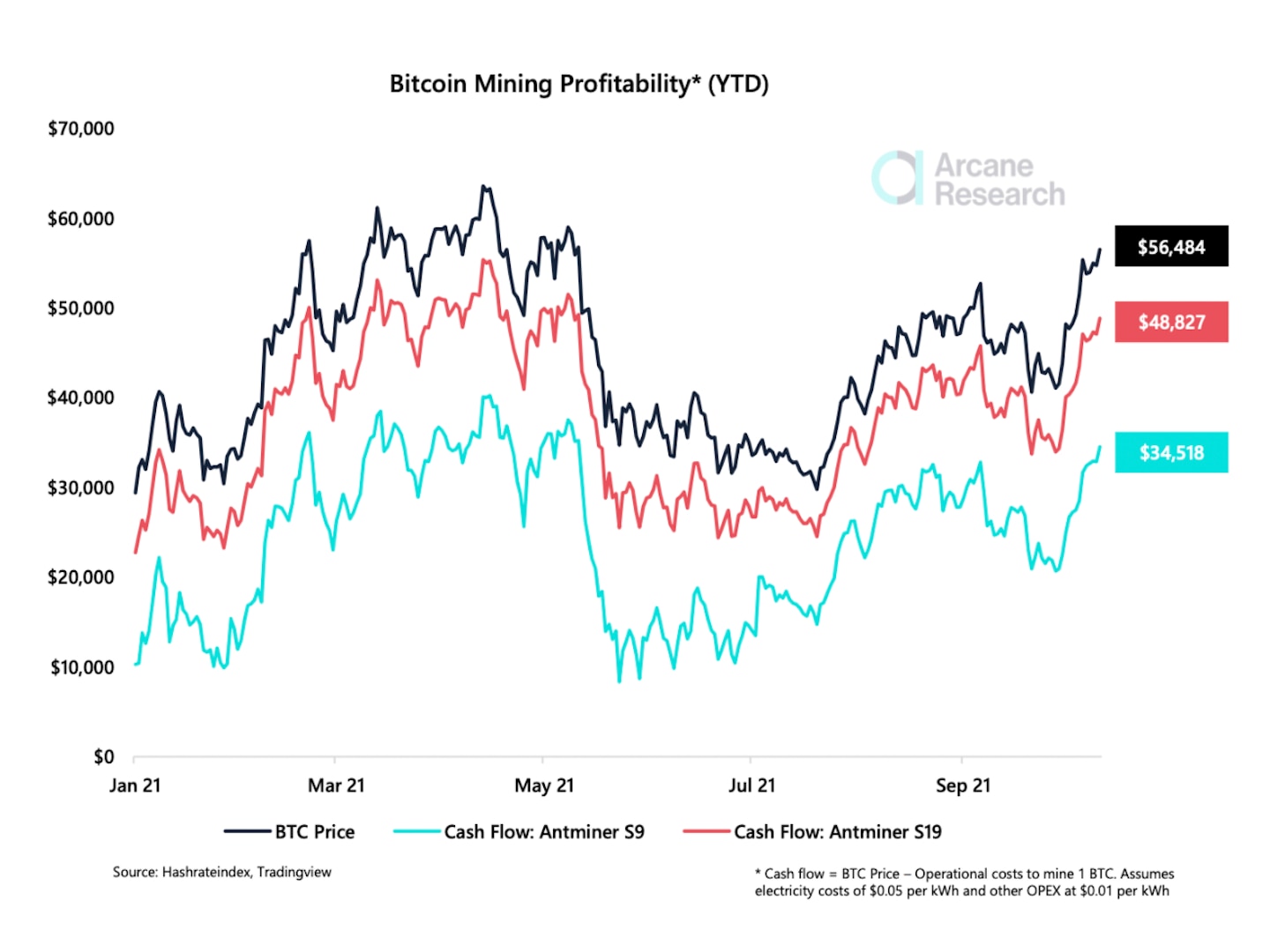