The world knows a thing or two about SHIBArmy, the community behind the self-proclaimed dogecoin killer shiba inu (SHIB). But did they know how powerful SHIBArmy can be?

SHIB, the token that’s clearly not taken seriously by most institutional investors, is still far from dead after another dumping event last week. Blockchain data reveals a tale of how small, individual investors can go against big institutions when they are united.

Since Monday, the SHIB community has been celebrating the survival of last Thursday’s bloody dump across social media platforms: “Shiba Inu rebounds 40% despite major selling by SHIB whales,” a Shiba Inu telegram group posted on Tuesday under the title “Whales are NOT in control of Shiba.” The message has since been circulating in many Telegram groups.

“We are Shiba The Doge Killer,” the message ended.

SHIB by the numbers

The whale dump mentioned in the message, according to blockchain data firm Santiment, took place on Thursday.

Santiment also captured a significant uptick in both active deposits and exchange inflow of SHIB at the time.

To be fair, with SHIB’s price still far below $1, the aforementioned message from Tuesday decrying the influence of SHIB whales isn’t fully supported. The top 10 SHIB addresses hold more than 78% of the total SHIB supply and barely moved any SHIB during the time period in question, according to Santiment data.

But nevertheless, the impact of such collective dumping among small SHIB traders is obvious: Last Thursday, the biggest dump so far, SHIB’s price dropped by more than $17% on the day, according to data from TradingView and Binance.

Professional traders who spoke to CoinDesk are not sure why the meme coin is showing such resiliency.

A comparison of SHIB to its predecessor, DOGE, is even more stunning: SHIB’s merely 23% down from its peak in May, according to CoinGecko. DOGE, perhaps the most well-known and popular of the dog coins, is down by more than 68% from its top in May.

“SHIB is like this ‘retail-traders-take-over-the-world’ magic token” that has gained a strong base, Darren, an active SHIB community member who goes by the name “Darren” told CoinDesk via WeChat. He added that many of the SHIB holders do not track bitcoin’s ups and downs, so it’s hard to pin SHIB’s moves on that of other cryptocurrencies.

The coin’s strong retail user base is also reflected on social media platforms, according to Du Jun, co-founder of crypto exchange Huobi, who pointed out that SHIB’s official Twitter account has more than 1.1 million followers, a higher number than most of other crypto projects.

“Shiba inu has a strong user base and its projects are relatively simple and easy to understand for crypto beginners,” Du said. During the past summer when SHIB’s performance was more lackluster, unique addresses for SHIB also managed to continue to grow, per data from Nansen. There are over 750,000 unique addresses holding SHIB as of Oct. 11, more than doubled from May 10 when its price hit an all-time high.

“Price slides haven’t deterred new entrants who think SHIB can go much higher since it is relatively very cheap, especially when compared to DOGE, which it emulates and aims to surpass,” Hunain Naseer, senior editor at OKExInsights, said.

Santiment told CoinDesk that Thursday’s dumping event was not the first time when many addresses holding 1 million to 10 million SHIB chose to take some risk off the table.

Each sell-off resulted in an immediate price dip – followed by a quick rebound. 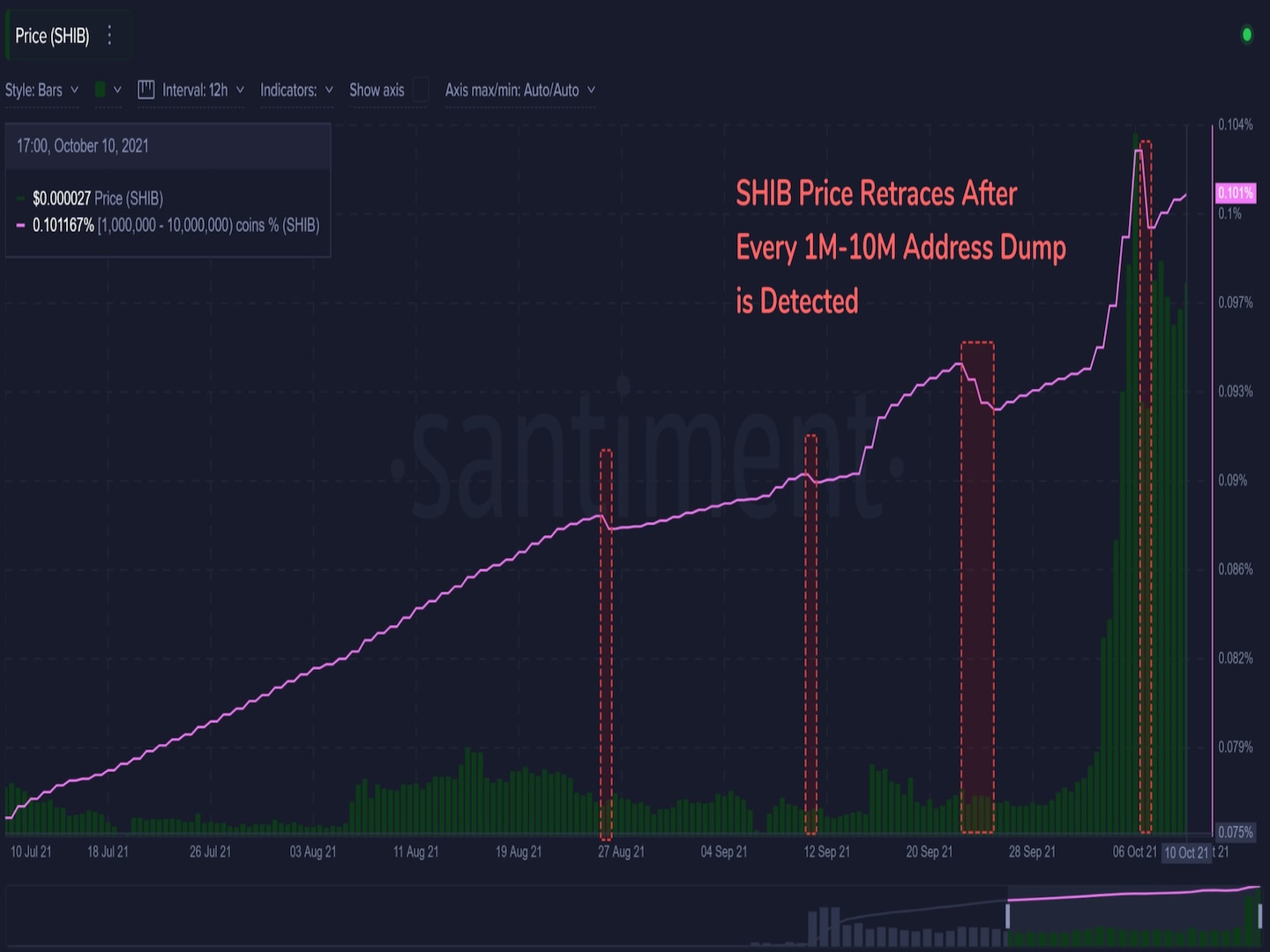 Collective dumping behavior by small traders – not long after some pro-SHIB posts on social media – is one of the more plausible explanations for the trading behavior, according to Santiment.

“With meme coins [that have] many small traders, like DOGE and SHIB, there can be many pump and dump groups where collective small traders cause an impact in the price direction they’re hoping to achieve for the short-term,” Santiment’s Brian Quinlivan said.

Quinlivan also noted that SHIB holders in the 1 million to 10 million range are the only group trading a significant amount of SHIB, addresses holding more than 10 million SHIB, which own 99.9% of SHIB supply still, have barely moved their SHIB holdings.

Notably, one address accumulated more than 8 trillion SHIB (about $234.3 million) on Thursday. The address has not moved out any of its SHIB holdings.

Despite the potential new threats of SHIB whale activity, the SHIB community has moved on and seems only getting stronger.

As of Wednesday, SHIB is still among the top 10 most traded tokens on centralized exchanges, according to CoinGecko, an impressive number when the majority (68%) of SHIB trades are still taking place on decentralized finance (DeFi) protocols, based on Nansen’s data.

Santiment pointed out that the amount of daily addresses interacting with SHIB is “crazy high,” especially compared with many other more established tokens on Ethereum. 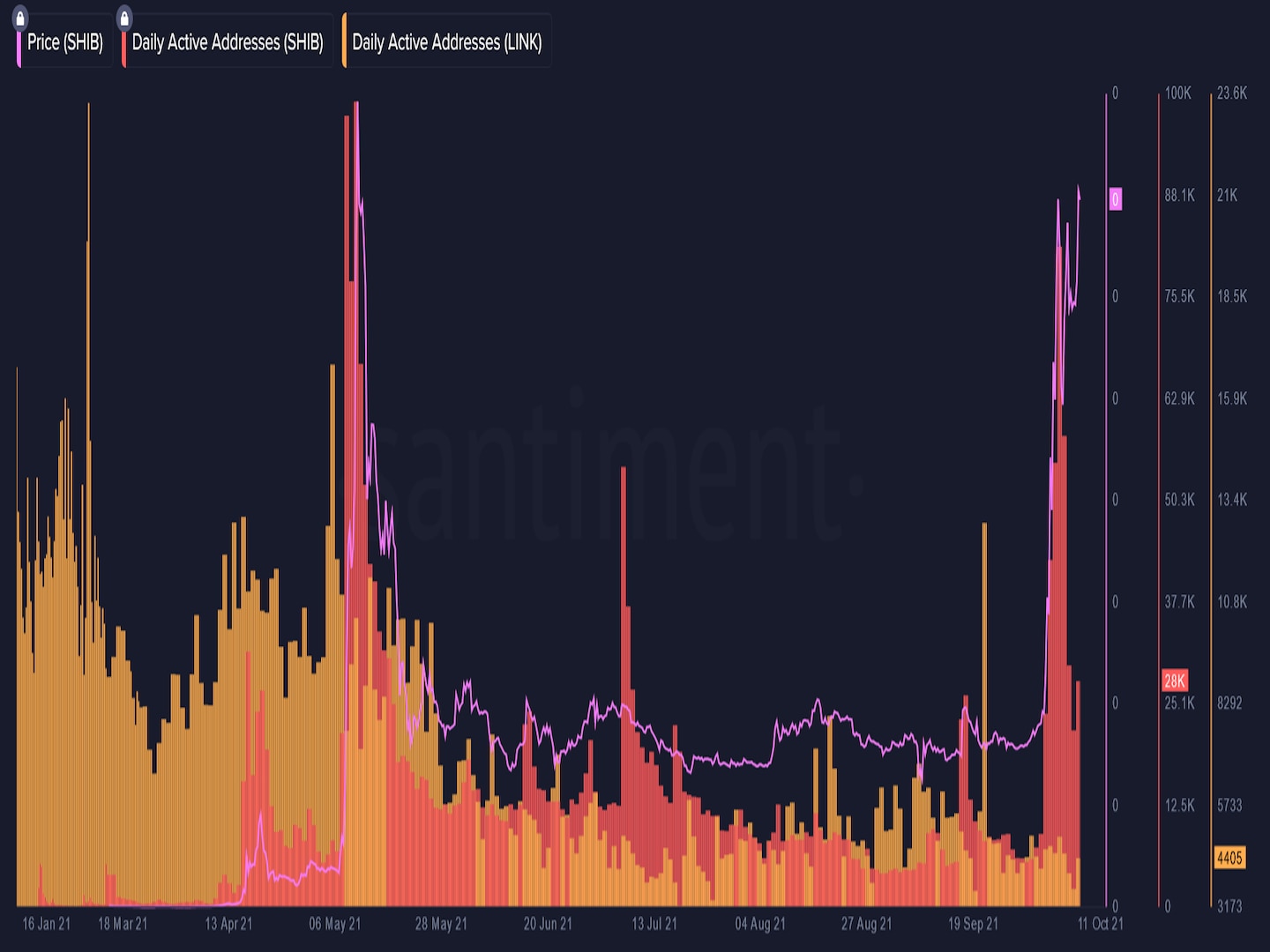 Data from Nansen and another blockchain data firm, Crystal, indicates that the SHIB is actively traded on decentralized exchange Uniswap – around half of the coin’s total supply has moved to Uniswap.

Huobi’s Du added that ShibaSwap, the decentralized exchange powered by SHIB, has built a number of functions including swapping, staking, farming and even non-fungible tokens (NFTs), meaning that the project has grown out of a “meme coin” to a “sophisticated” DeFi project.

SHIB community member Darren also explained that many crypto newbies have remained active in the SHIB project because they were grateful for the wealth they’ve achieved through SHIB.

“The markets remember the time when a lot of new retail traders made money through SHIB earlier this year,” he said.

SHIBA “is already considered a mainstream coin, and unlikely to go away anytime soon,” Du said.