Decentralized finance (DeFi) platforms and their associated yields have earned a unique reputation across traditional finance and even the broader crypto market as risky, unsustainable and even Ponzi-esque. Where does the yield come from and how is it 100 times higher than the rates offered from bonds, certificate of deposits or savings accounts?

A handful of protocols essentially created peer-to-peer lending, trading and insurance protocols that remove a middleman like a bank, exchange or insurance company and allow smaller users to take their place. Here are some examples at a very basic level:

Aside from offering low trading and lending fees, DeFi protocols have been generous in giving away their “governance tokens.” These native tokens often hold rights to a small percentage of protocol earnings, much as a company might pay dividends to shareholders.

Furthermore, some of the most prominent protocols have given token holders a share in the responsibility to control the future plans, upgrades and offerings of the project itself. Curve DAO and its native token CRV are examples of that governance model with the token playing a vital role in the protocol and the broader DeFi universe.

Until recently, Curve had been extremely under discussed, considering the major role it holds in DeFi across blockchains. Recent shifts in tokenomics led its native token, CRV, to become net deflationary; subsequently, the price is up 122% since the token became deflationary. To understand DeFi yields, it is almost essential to understand the inner workings of Curve. So what does Curve do and how does it do it?

Curve is a decentralized exchange, known for its pegged-asset swaps like fiat-pegged stablecoins or assets that trade at a 1-1 ratio. With over $3 billion in deposits, Curve’s largest pool is known as 3pool and contains DAI, USDC and USDT. The stablecoin pools have gained traction offering high liquidity and low fees (0.004%), because Curve uses its native token to reward liquidity providers instead of higher swap fees. Below you can see the results of swapping $75 million from USDC to USDT on Curve, Sushi and Uniswap, with Curve optimizing the swap with significantly less slippage than its competitors. Slippage is the difference between expected and executed price on a trade, or how far away from market price the trade executes. 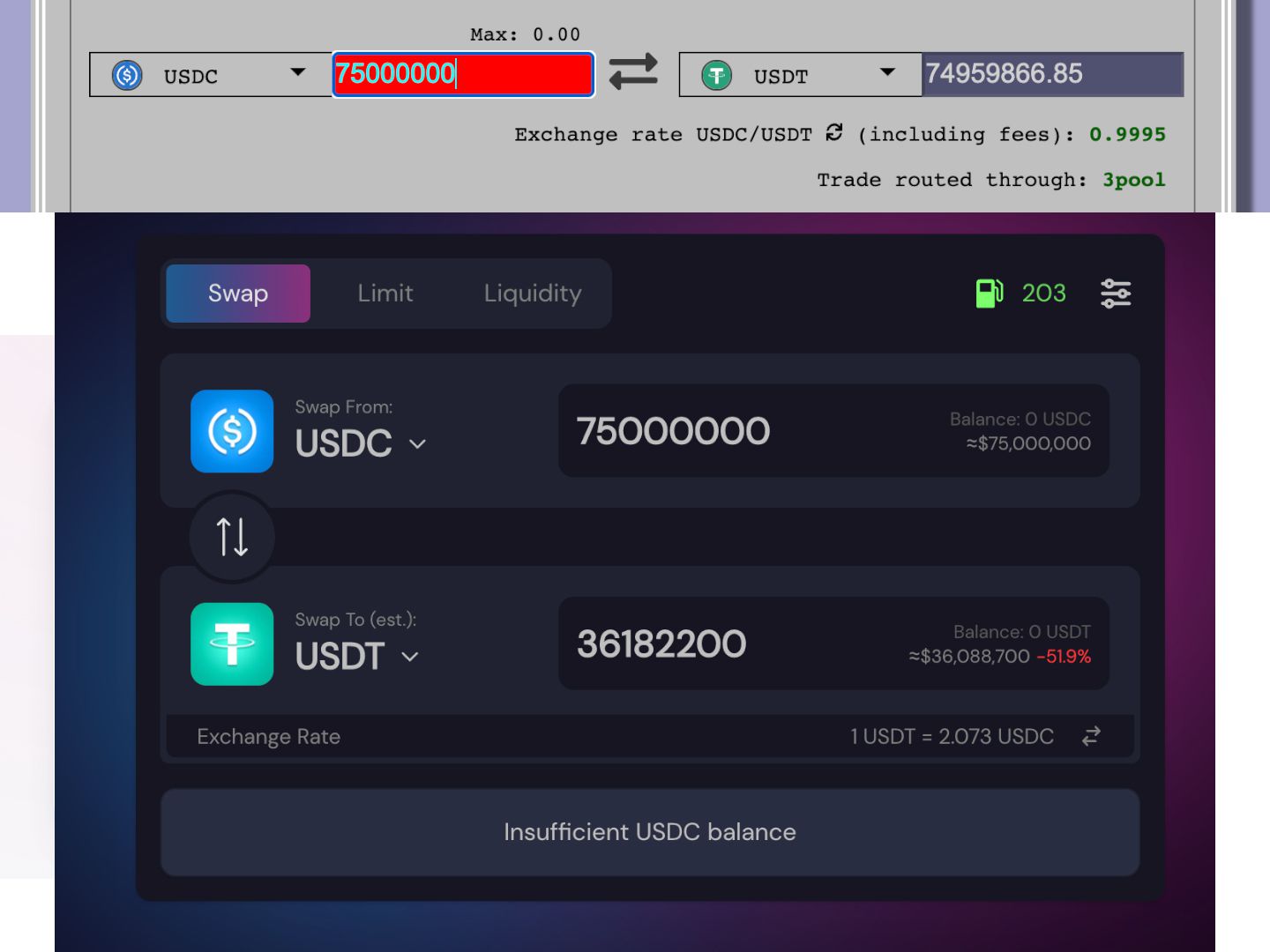 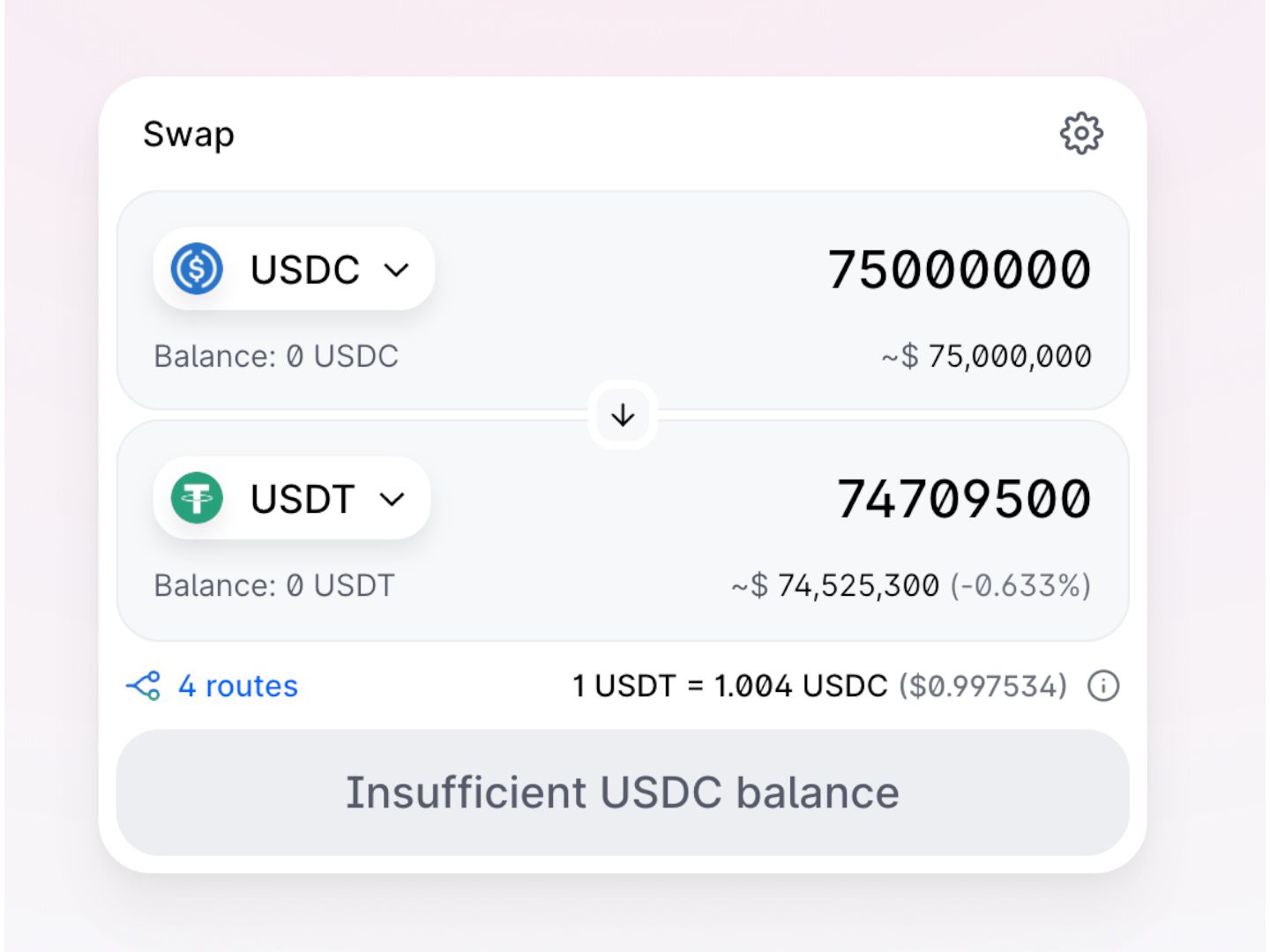 CRV holders may “stake” their tokens in the platform and lock them in fixed periods of between one week and four years to decide their voting weight. Depending on the amount of Curve locked and the length of time locked, stakers are given an adjusted amount of vote-escrowed Curve (veCRV). veCRV holders are then able to vote on how CRV rewards are distributed across Curve’s pools by assigning weight to the “pool gauge” aligning with their financial interests. The gauge is an instrument to measure which pool is weighted most heavily with rewards and gauge votes occur biweekly via Snapshot.

Subsequently, a system for bribing veCRV holders to vote in favor of specific gauge weightings has arisen. Projects like Abracadabra pay veCRV holders in their native token for weekly bribes to boost the yield on their decentralized stablecoins, increasing demand for their own project. Abracadabra has paid the equivalent of $1.9 million to veCRV holders willing to vote for their stablecoin pool in the last two weeks alone, now giving their pool 32.5% of the relative gauge weight.

Holders of veCRV also earn a portion of the protocol’s revenue via swap fees. According to Curve’s documents, “A community-led proposal introduced a 50% admin fee on all trading fees. Those fees are collected and used to buy 3CRV, the LP token for the TriPool, which are then distributed to veCRV holders.”

The dynamic capabilities of veCRV have kept the demand for CRV strong, even with inflation, to match the demand for maximized yield and low-fee swaps. However, as seen below, the emission schedule has slowed because of the end of early user rewards. The demand for locking CRV has also increased, turning the asset net “deflationary.” The CRV that is locked for voting is not considered part of the token supply, as it is non-liquid and the majority is locked for the next three to four years. The foundation for DeFi

The dynamic capabilities of the CRV token and ecosystem have made the project an attractive building block for several other DeFi projects, namely Yearn and Convex. The two projects can be considered “yield optimizers” that rotate assets between Curve pools and remove the complexities of efficiently using the CRV token. Both protocols allow users to deposit Curve liquidity positions (LPs) or CRV into their vaults, which then harvest rewards – both compounding the LP position and reinvesting in CRV to optimize yields.

Yearn was born out of the “DeFi summer” and started to quickly pull in large ownership of veCRV, holding nearly 10% of the supply when Convex was launched. In a few months, however, Convex was able to swallow over 35% of the veCRV supply. The competition for control over Curve’s gauge voting and yield boost was dubbed “Curve Wars,” and some in the DeFi community believed the projects were playing a zero-sum game. Bankless HQ has highlighted where the two protocols differ and how each gets its competitive edge.

“There are three key differences between Convex and Yearn:

The two protocols are undeniably competing on some level, but their combined presence seems to grow the Curve pie as a whole. In fact, Yearn is likely one of the largest depositors in certain Convex strategies, with $724 million deposited in Covex’s sETH strategy and $586 million deposited in the usdn3crv strategy.

While Convex supporters have been pitching that the protocol now owns a much larger portion of veCRV than Yearn does, Yearn developer @bantg suggests that Yearn’s responsibility for a large portion of Convex’s CRV holdings and total value locked, or TVL, makes simple metrics less valuable for comparing the two products.

Over time, Yearn and Convex appear to be symbiotic and a net positive for each other. More clear, however, is the positive effect they both have on Curve and CRV. If the demand for stable yields continues to grow, the fight for maximized boosts on Curve has only just begun. Yearn and Convex will continue to purchase CRV in an attempt to keep up with their increasing TVL and to offer the highest possible yield.

Early user rewards are also coming to an end, meaning CRV emissions are topping out.. A recent CoinDesk article highlighted CRV’s recent performance and why it is standing out, even as the wave of “dog coins” is taking over the crypto trading narrative. The chart below shows a very clear trend: Curve’s importance in the DeFi ecosystem

Curve now has almost $18.8 billion in TVL across seven different ecosystems, making it the second-largest decentralized application, or dapp, behind Aave and giving the project 11.4% of Ethereum’s overall DeFi TVL. According to Curve’s release schedule, during the third quarter, about 113 million CRV tokens were released to the community. At the current price and TVL, that equates to a 12% annual percentage yield to stakers and liquidity providers, not accounting for swap fees and incentive programs from alternative chains like Polygon and Avalanche.

Providing such enormous liquidity rewards has given Curve the reputation of being the backbone of all DeFi yields. A jump in CRV price usually signals a “risk-on” DeFi market, with yields trickling down throughout the ecosystem.

Stablecoin swaps are not the only source of DeFi yield. Aave and Compound both offer relatively attractive returns on stablecoins and crypto assets for providing collateralized loans. However, the demand for swapping stables is an essential piece of arbitraging lending rates or moving capital between protocols and exchanges. Curve has established itself as a go-to player for large swaps and passive yield, as well as a testing ground for decentralized stablecoins like DAI or MIM, and tokenized assets like staked ether.

DeFi TVL hitting all-time highs most likely signals a growing hunger for yield. Large funds or high-net-worth individuals will use Curve, Yearn and Convex for non-volatile yields, making the “Curve Wars” as important as ever.