Bitcoin has traded mostly sideways over the past two weeks, prompting some traders to consider alternative cryptocurrencies such as ether for greater profit potential.

“Our models are still full risk-on ETH (whereas our bitcoin model started reducing exposure last week) but we are starting to see some slowing in conviction buying,” Ben McMillan, chief investment officer at quantitative research firm IDX Insights, wrote in a research report.

BTC’s price has been roughly flat over the past week, compared with a 4% rise in ETH and a 23% rise in Solana’s SOL token over the same period.

“Investors are likely looking for the next catalyst for another leg higher, but the absence of such is likely to leave bitcoin vulnerable to a break below $60,000,” Daniela Hathorn, an analyst at DailyFX, wrote in an email to CoinDesk.

“Typically, we tend to see BTC sell off a bit after breaking to a new all-time high as traders front-run the hype,” crypto research firm Delphi Digital wrote in a blogpost on Thursday, referring to traders dealing on advance information .

But some analysts expect further upside despite signs of slowing price momentum.

“With MVRV [bitcoin’s market value relative to its realized value] currently trading at 2.72, far off from its recent peak of 3.96″ in February, crypto investment firm StackFunds said in a report it is “expecting further room for growth as [MVRV] retests the 4.0 handle,” along with blockchain metrics showing strong bitcoin accumulation.

Why this bull run is different

Bitcoin’s two bull runs of 2021 have differed from those in past years. One key distinction has been decreased volatility expectation, CoinDesk’s Muyao Shen reported.

This metric, which shows the cryptocurrency’s expected price swings, did not spike when bitcoin’s price hit record highs in April and then in October, indicating that bitcoin may be evolving into a more mature investment asset. 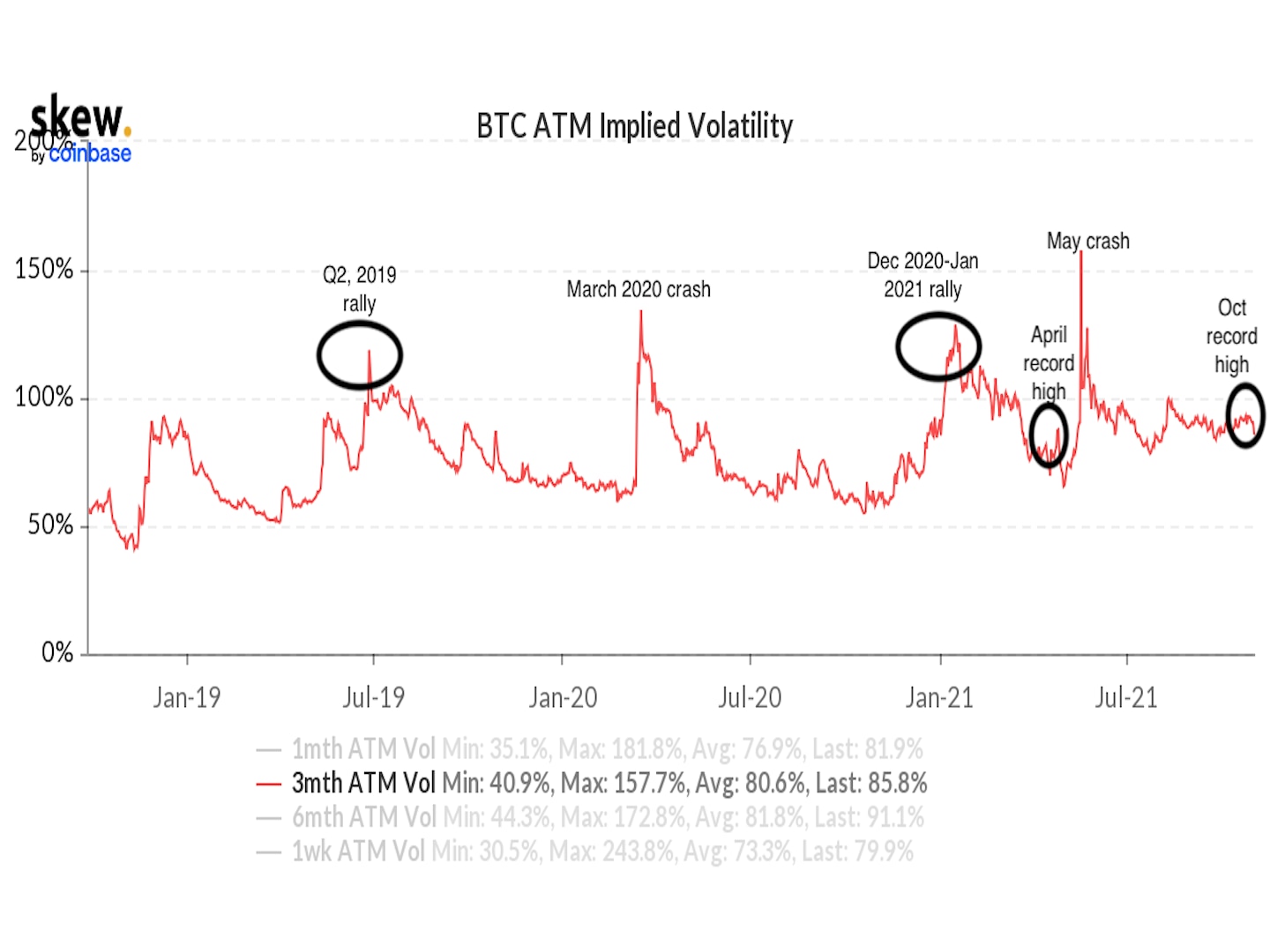 Prior to 2021, bitcoin’s three-month implied volatility (IV) – investors’ expectation of how turbulent prices will be over the ensuing three months – spiked during both bull and bear runs, according to data from crypto data firm Skew. But this year, a similar spike only occurred when the market crashed in May.

Some analysts remain bullish on ether, the world’s second-largest cryptocurrency by market capitalization. The price reached an all-time high around $4,600 on Wednesday.

FundStrat, a global advisory firm, expects ether to rally as high as $4,951 “with little to no resistance” after outperforming bitcoin recently and breaking through September highs.

“While weekly and monthly momentum do show overbought conditions, this won’t be a big deal until near-term technicals begin to show evidence of upside exhaustion,” Mark Newton, FundStrat’s global head of technical strategy, wrote in a research note on Wednesday.

Newton also sees further upside in ETH relative to BTC (ETH/BTC price ratio) if price resistance near 0.08 is broken. “At present, the most likely outcome is a bit more outperformance, followed by a stall out,” Newton wrote.