Total assets under management (AUM) have also reached an all-time high of $80 billion, with bitcoin and ether leading the chart with roughly $53 billion and nearly $20 billion, respectively, according to CoinShares data.

Inflows in bitcoin totaled $95 million last week with a year-to-date record of $6.4 billion invested in the largest cryptocurrency. 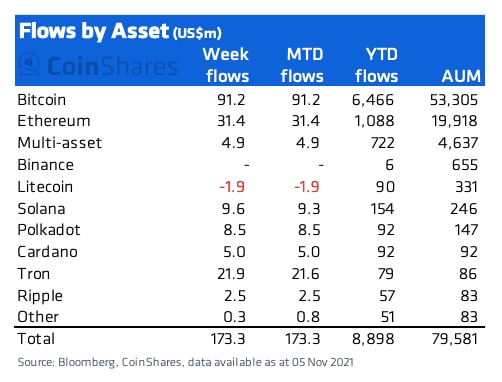 With the recent events in the digital asset industry, these new highs shouldn’t be surprising because cryptocurrency investments are becoming more mainstream. On Monday, former Citigroup CEO Vikram Pandit said that in the coming years, every major bank and/or securities firm will think about trading crypto.

For Ethereum, sentiment has remained positive. Funds focused on the blockchain’s native cryptocurrency, ether, saw inflows of $31 million last week. “Ethereum’s market share has suffered in recent months due to bitcoin’s dominance, but the recent combination of positive price performance and inflow has seen their AUM rise,” the report said.

Another coin that stood out last week was TRON, the coin associated with a digital platform focused primarily on hosting entertainment applications; there were inflows of $22 million. Tron is now the eighth largest coin by assets under management, according to CoinShares data.