Market moves: Bitcoin recovered from Wednesday’s dip to near $64K as trading slowed from earlier in the week.

Technician’s take: Upside momentum is starting to slow, especially given recent overbought signals on the charts.

Bitcoin spent most of Thursday ranging around $65,000 during U.S. trading hours as the markets slowly digested a highly volatile trading day on Wednesday, when bitcoin dropped to near $64,000. At the time of publication, bitcoin was up slightly over the past 24 hours. Ether was above $4,700, a nearly 3% gain.

Bitcoin’s spot trading volume across centralized exchanges tracked by CoinDesk was much lower on Thursday compared with Wednesday, as bitcoin slowly recovered to above $65,000. Markets have remained bullish, despite the centralized exchanges that offer bitcoin futures liquidating roughly $133 million in long positions when bitcoin started dropping from a record high of $68,990.90 on Wednesday, according to data from trading data site Coinglass. 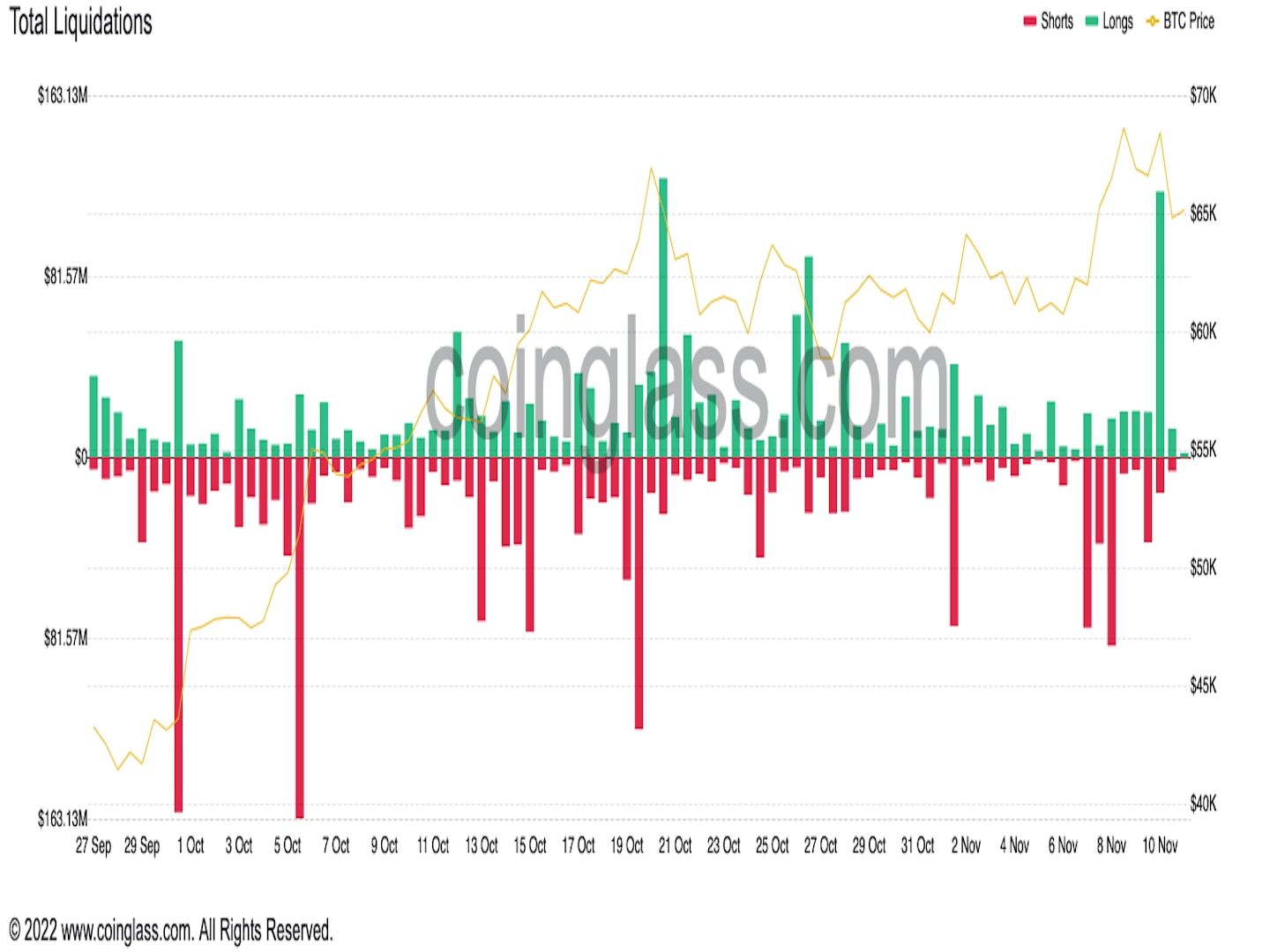 Others pointed out Taproot, the most significant upgrade to the Bitcoin blockchain’s protocol in years, could further push up the underlying currency’s price. The Taproot upgrade is likely to take place this coming weekend or early next week.

Bitcoin’s “price has no doubt been supported by the upcoming Taproot upgrade,” Singapore-based trading firm QCP Capital, wrote in its Telegram channel on Wednesday. “This is the largest upgrade since SegWit in 2017 and will improve a whole string of key functions. … We are keeping long bitcoin into this major event.” Bitcoin (BTC) buyers took some profits after the cryptocurrency reached an all-time price high near $68,950 on Wednesday. The cryptocurrency is roughly flat over the past 24 hours and could find lower support around the $56,000-$60,000 price range.

Upside momentum is starting to slow, especially given recent overbought signals on the charts. This suggests BTC’s pullback could extend into Asian trading hours, although buyers will likely return around $60,000.

The relative strength index (RSI) on the daily chart is at the highest level since Oct. 20, which preceded a near-10% drop in BTC’s price.

What’s Behind the Market Pullback? Miami Mayor Francis Suarez on the Race to Become the Next Bitcoin Hub as New York City Gets Its Own Coin and More

“First Mover” hosts spoke with Miami Mayor Francis Suarez for details on his plan to take his next paycheck in bitcoin, as well as the city’s plan to become the next bitcoin hub. Community Lead for CityCoins Patrick Stanley shared the newly launched NYCcoin, which many see as a rival to the Miamicoin. Plus, market insights from co-founder and President of GSR Markets Rich Rosenblum.

Investing in Bitcoin Directly May Be Better Bet Than Coinbase: Mizuho

Bitcoin Politics From Left to Right and Off the Map