Bitcoin on Tuesday suffered its worst daily loss in almost four weeks, all but upending any near-term hopes of a return to last week’s all-time high near $69,000. The bitcoin price was down more than 5% over the past 24 hours.

“Overall, we’ve turned quite neutral after this awaited leverage washout,” the cryptocurrency trading firm QCP Capital wrote Tuesday in a market update on its Telegram channel. “We expect some gravity around this [$]60,000 level.”

In trying to explain the latest sell-off, traders cited U.S. President Joe Biden’s signing this week of an infrastructure bill containing a controversial cryptocurrency tax-reporting requirement, as well as a drop-off in enthusiasm after last weekend’s Taproot upgrade on the Bitcoin blockchain, the network’s first major enhancement in four years.

“There was some expectation that this would be a catalyst for a leg higher in price,” QCP Capital wrote. “The lack of reaction caused a ‘buy the rumor, sell the fact’ effect.”

In traditional markets, stocks rose after a report of higher-than-expected U.S. retail sales in October, seen as an indicator that consumers remain ebullient despite the fastest inflation rate in three decades.

But there’s some speculation that higher inflation might prompt the U.S. Federal Reserve to accelerate tightening its monetary policy. Such a move could put downward pressure on investment assets considered risky, such as bitcoin and other cryptocurrencies.

“Bitcoin may continue to attract inflation hedges, but if pricing pressures trigger rapid rate-hiking action from the Fed, that could trigger a massive wave of risk aversion that would penalize cryptos,” wrote Edward Moya, senior markets analyst for the foreign-exchange broker Oanda. 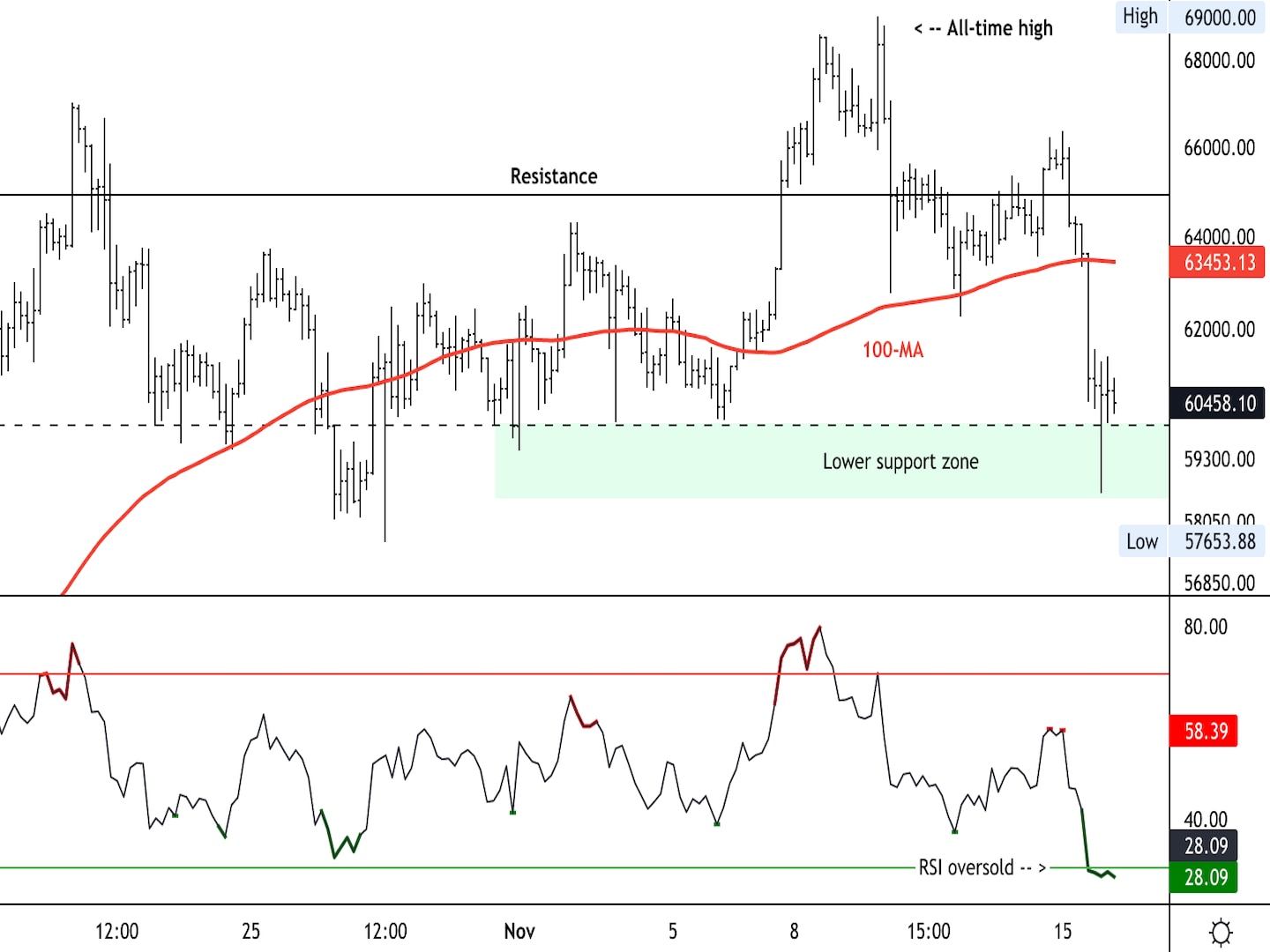 Bitcoin (BTC) is down about 5% over the past 24 hours after sellers became more active than buyers around the $65,000 resistance level.

The cryptocurrency was stabilizing around $60,000 support and appeared to be oversold on intraday charts.

For now, short-term indicators suggest limited downside into Asian trading hours. For example, the relative strength index (RSI) on the four-hour chart is the most oversold since Oct. 27, which preceded a near 10% price bounce.

Still, the RSI on the daily chart was neutral as upside momentum continues to wane. This suggested intraday buyers will be quick to take profits around the $63,000-$65,000 resistance zone.

A period of consolidation could persist over the next few days before BTC establishes a stronger footing around the $60,000 support zone.

Bitcoin Falls Below $60K as Cryptocurrencies Tumble, Barbados Ambassador Explains Why the Country Is Setting Up Embassy in the Metaverse

“First Mover” hosts spoke with Barbados Ambassador to the United Arab Emirates Gabriel Abed as the Caribbean country says it will become the first sovereign nation to set up an embassy in the metaverse. Meanwhile, bitcoin dipped below $60,000 amid more tough talk from China and negative comments from a Twitter executive. Genesis Volatility co-founder and CEO Greg Magadini shared his market insights. Plus, what’s contributing to BitGo’s rapid growth this year? BitGo CEO Mike Belshe explained.

‘I Think We’re Doing This’: Inside One DAO’s $20M Plot to Purchase the US Constitution

Bitcoin Politics From Left to Right and Off the Map

What Is Bitcoin’s Lightning Network?