“Layer 1″ refers to blockchains that run independently of other blockchains – as contrasted with “layer 2″ solutions that aim to speed up transactions on existing blockchains like Ethereum.

One such blockchain, Avalanche, saw its AVAX token rise 70% in November, the top performing layer 1 platform with a market capitalization of $10 billion or greater, according to data from Messari. Among the largest cryptocurrencies, AVAX was the second-biggest gainer overall, behind Crypto.com’s CRO token, which more than tripled in price during the month.

The platform has also announced more than $600 million of marketing initiatives and incentives recently to spur growth on the network, possibly another factor in the price uptick.

Another alternative blockchain, Terra, saw its LUNA token rise 28% on the month, followed by Solana’s SOL, which rose about 5%. Notably, the gains came during a month when bitcoin, the largest cryptocurrency, slid 4.5%. Ethereum’s native cryptocurrency, ether (ETH), rose 7%.

“AVAX, SOL and LUNA are rallying along with other layer 1 protocol tokens, which have made huge gains as fees on the Ethereum network remain near all time highs,” said Clara Medalie, research lead at Kaiko, a market data provider.

Research from IntoTheBlock shows that transaction fees on Ethereum have continued to increase and are around $43 as of Nov. 27. Just a year ago, fees were around $1.15. 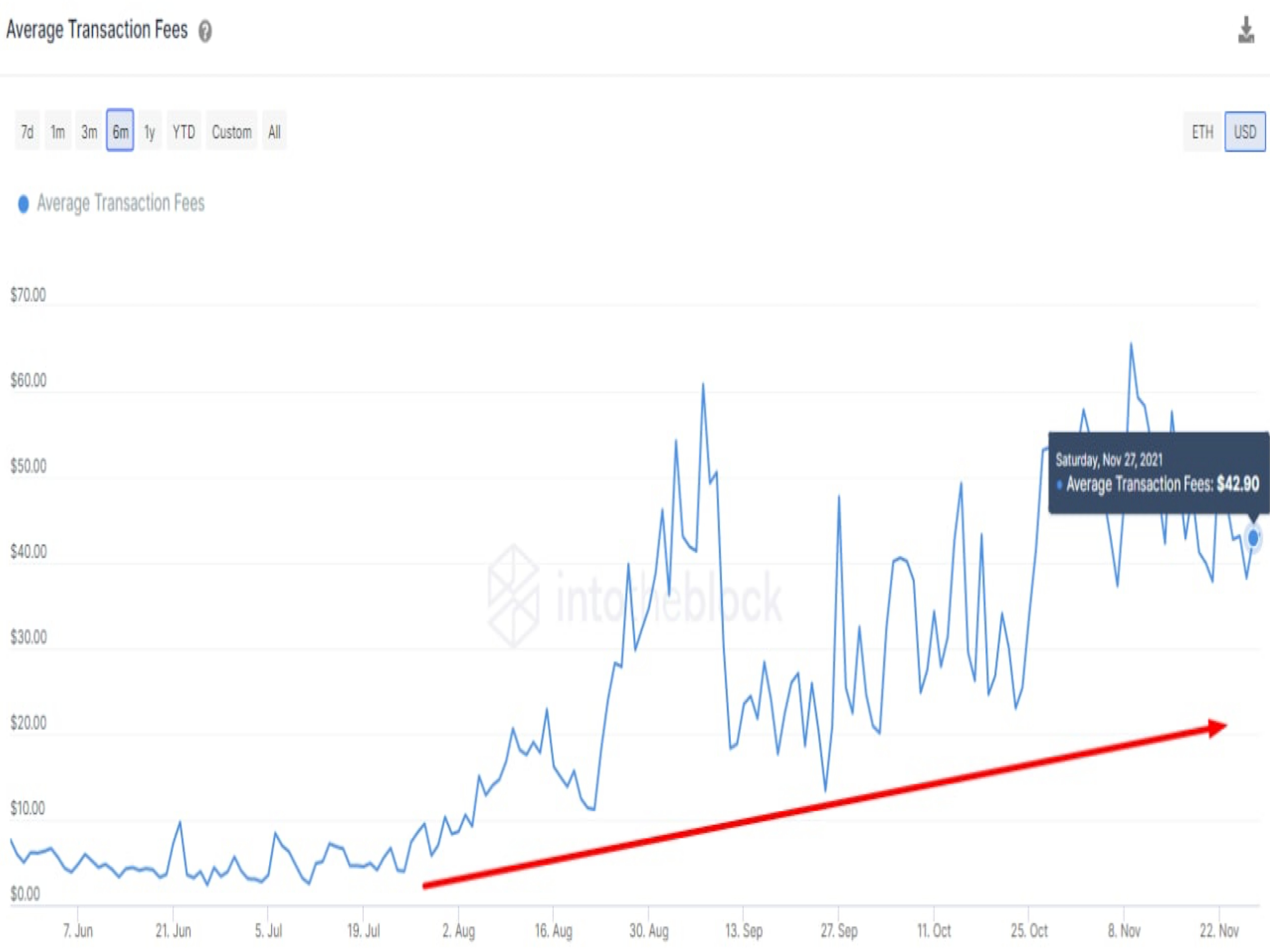 With transaction fees continuing to increase on Ethereum, users have had to explore alternative blockchains with lower costs, according to Matthew Dibb, Stack Funds’ chief operating officer and co-founder.

Anto Paroian, chief operating officer at ARK36, a cryptocurrency investment fund, said blockchains like Solana are getting a boost because the market is betting on the gaming and play-to-earn sector to keep growing. Play-to-earn refers to video games where users can earn cryptocurrencies as rewards.

The Sandbox, a virtual world where players can build, own and monetize their gaming experiences using non-fungible tokens (NFTs), has seen its SAND token rise 236% on the month, while MANA, the token of virtual reality platform Decentraland, is up 65%.

Play-to-earn platform Axie Infinity was down on the month by 0.41%.

“That’s why blockchains that support these coins and ecosystems – such as Solana – are seeing so much uptrend,” Paroian said.

“The amount of hype, as well as projects being built in the metaverse, gaming and NFT spaces, is bullish for these blockchains that are designed to build dapps on top of,” said Alexandre Lores, an analyst at Quantum Economics. NFT refers to non-fungible tokens, which can represent interest in property, clothing, weapons or other items within games and virtual-reality worlds. A dapp is a decentralized application built atop a blockchain, such as automated cryptocurrency lending and trading platforms.

“These spaces are poised for 10x growth in the next few years regardless of BTC price action,” he added.

Paroian said neither Solana nor Avalanche are likely to dethrone Ethereum anytime soon, but “if ETH doesn’t take care of its gas fees problem, it is running the risk of becoming less and less competitive.”

Juan Pellicer, an analyst at IntoTheBlock, noted that the market capitalization of these coins is still relatively small compared to Ethereum’s $526 billion.

Stack Funds’ Dibb expects any further downside in BTC could lead to selling pressure for AVAX and SOL, especially since they’ve been bid up so aggressively in recent months.

While most layer 1 platforms saw gains over November, polkadot (DOT), saw a steep loss of 24%.

According to Pellicer, the reasons for polkadot’s underperformance aren’t clear.

Polkadot recently launched its first parachain auctions, which saw almost $3.5 billion collected by 10 hopefuls. The first coveted Polkadot parachain slot was won by decentralized finance (DeFi) platform Acala, which edged out Moonbeam for the first slot. Parachains are the individual layer 1 blockchains that run in parallel on Polkadot.

“A reason might be that now that their parachains are released, they are gaining gaining traction slower than traders’ expectations, since they are still lacking the volume and liquidity that other blockchains are currently seeing,” said Pellicer.

Edward Moya, senior analyst at the foreign-exchange broker Oanda, noted in an interview with CoinDesk that Cardano, which underwent a major upgrade in September known as the Alonzo hard fork, has struggled to attract massive projects, and its ADA token is down 16% on the month.

“Altcoins will have a tight leash on their trades while bets on bitcoin and ethereum should remain key holdings for most crypto investors,” said Moya.