Bitcoin fell as bond yields rose ahead of a U.S. inflation report that could seal the deal for a faster unwinding of stimulus by the Federal Reserve (Fed).

The U.S. consumer price index (CPI) report scheduled for release at 13:30 UTC is forecast to show the cost of living in the world’s largest economy increased at an annualized 6.8% in November, following October’s 6.2% print, according to FXStreet.

“We expect headline inflation to push towards the 7% level, and to fall close to consensus expectations (currently at 6.8%),” ING analysts said in a blog post.

The data is likely to inject volatility into the crypto market, trader and analyst Alex Kruger tweeted.

That’s what happened last month. Bitcoin, a perceived inflation hedge, rose over $3,000 to a record $68,990 on Nov. 10 after the October figure came in at a three-decade high. Prices tanked to $63,000 later in the day as money markets ramped up bets that the Fed would suck liquidity out of the financial system to contain inflation.

A somewhat similar action might unfold later Friday if the data beats estimates, paving the way for the Fed to accelerate the taper in December and forcing markets to price in a higher probability of an early interest rate hike. As of now, money markets see a roughly 40% probability of the Fed raising rates by 25 basis points to a 0.25%-0.5% window in March 2022. 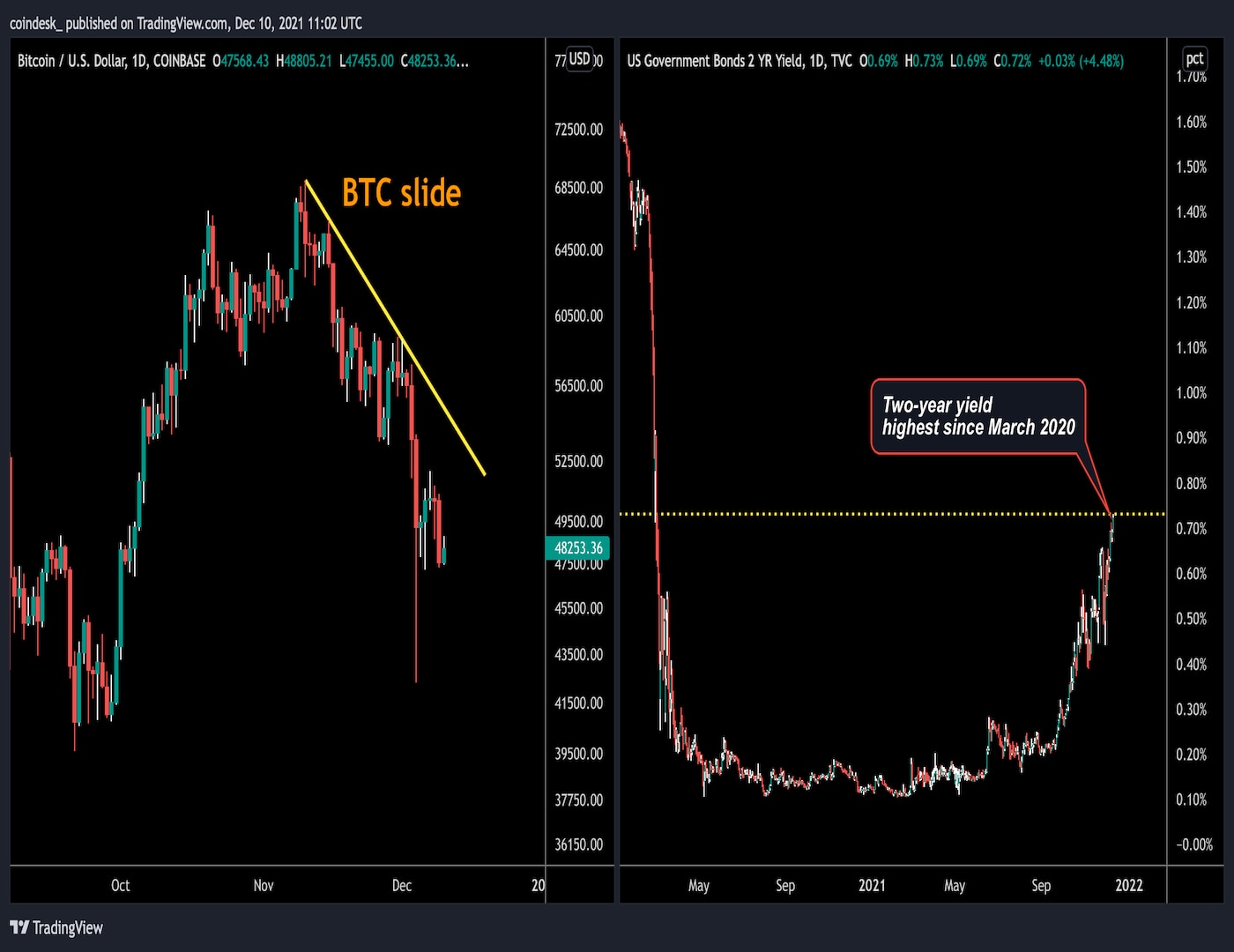 The continued uptick in the two-year Treasury yield, which is more sensitive to inflation expectations and rate-hike bets than the 10-year yield, suggests the market is pricing in faster Fed rate increases before the release. The two-year yield has risen to 0.73%, the highest since March 2020.

A weaker-than-expected report may provide some relief to asset prices, although it could be temporary. That’s because, according to ING, “inflation would need to drop quite sharply before the market can reasonably price out the Fed tightening cycle in 2022.”

These developments have perhaps challenged the popular narrative that the central bank may refrain from doing anything that will destabilize the market even at the cost of high inflation.

Bitcoin’s vulnerability to rate-rise concerns likely stems from its appeal as an evolving technology. Historically, the cryptocurrency has closely tracked movements in tech stocks, which are sensitive to monetary policy tightening. 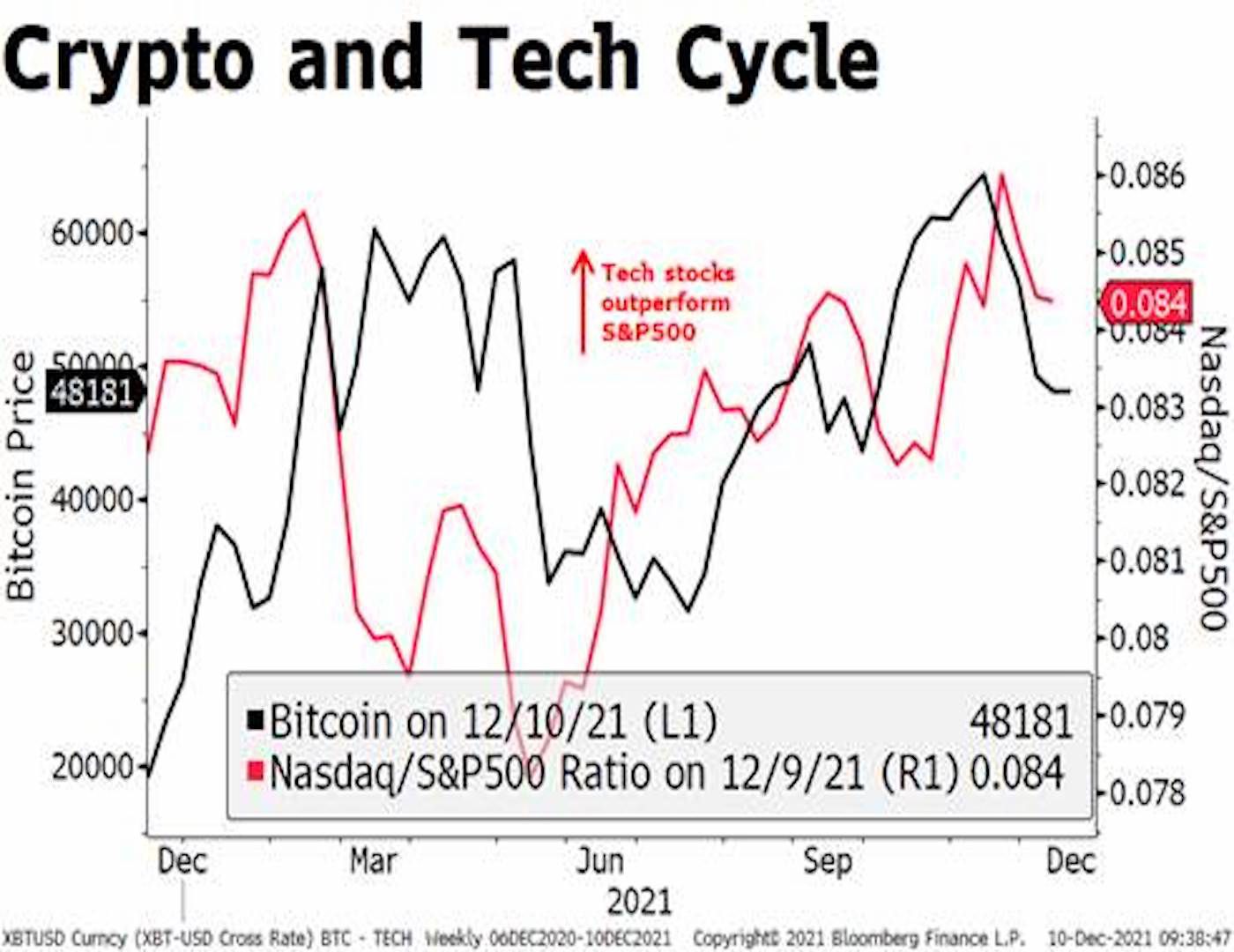 The above chart provided by Ilan Solot, a global market strategist at Brown Brothers Harriman, shows a strong correlation between the tech cycle, as measured by the ratio of the Nasdaq index to the S&P 500, and bitcoin.

A rising ratio, shown by the red line, means tech stocks are outperforming the broader equity market, typically a boom time for bitcoin and crypto markets.

“Like any financial asset, crypto will suffer from broad market moves. But in particular, crypto (proxied by bitcoin) this year seems to do better during periods when tech is outperforming,” Solot said in an email. “We can see this using a ratio of Nasdaq/S&P 500. This correlation may be driven by some overlap of the investor base, or simply because both assets tend to be higher beta.” Beta is a measure of the extent to which an asset moves in line with the broader market.

“But whatever the case, we suspect this correlation will loosen eventually, especially for non-BTC cryptocurrencies,” Solot said.

For now, however, bitcoin’s fortunes appear tied to tech stocks, which have begun underperforming the broader market amid strengthening bets on a Fed rate increase.