Market moves: Bitcoin moved above $47,000 a day before a Fed decision on combating inflation.

Bitcoin recovered some losses from Monday, trading above $48,000 on Tuesday. But the optimism may be short-lived as trading volume remained low.

Data compiled by CoinDesk shows that bitcoin’s trading volume across major centralized exchanges on Tuesday was down from a day ago, reflecting a conservative view among traders. 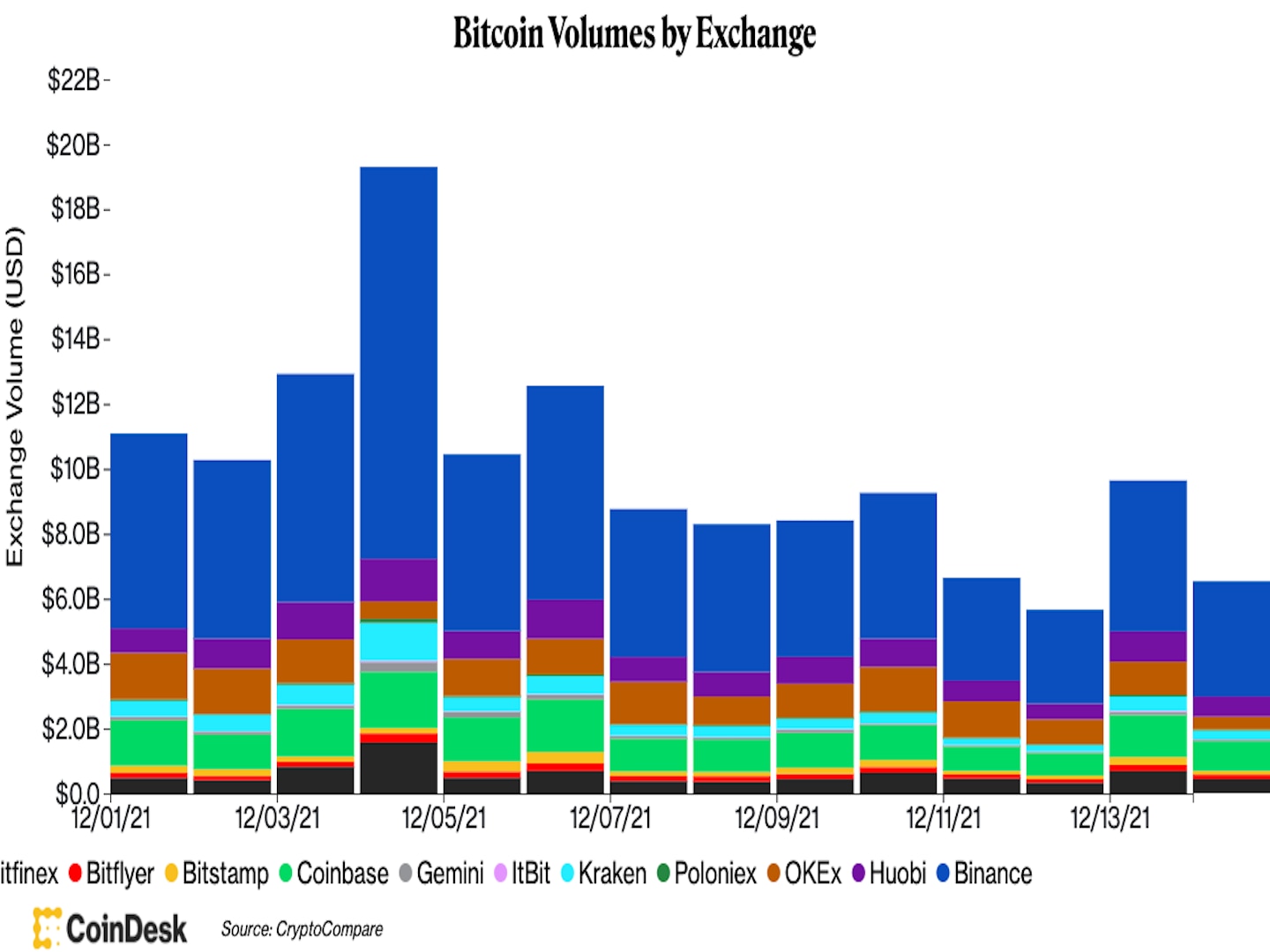 The U.S. Federal Reserve is expected to release its decision on Wednesday on whether it will move faster to wind down its bond purchases and signal if it will start raising interest rates next year. The stock market extended its losses on Monday as investors were closely monitoring the Fed’s upcoming decision.

“It is a bit of a daunting time right now,” Leah Wald, CEO of crypto asset manager Valkyrie Investments, said in an interview with CoinDesk. Bitcoin “is still down 30% from its all-time high but we are definitely seeing strong resistance at the $48,000 and the $50,000 level.”

Ether also moved up slightly, but was still well below $4,000 at the time of publication. Dogecoin, meanwhile, remains the winning alternative cryptocurrency (altcoin) of the day after Tesla CEO Elon Musk said the electric-car maker would accept DOGE as payment for its merchandise.

“I think there are a lot of opportunities in the market from other alternative currencies,” Wald said, pointing out ether’s weaker correlation to the traditional markets compared with bitcoin. “Ether is down 12% in the last week alone, which is very daunting, but at the same time there are a lot of reasons to expect that ether could potentially stage a recovery much sooner than bitcoin.” 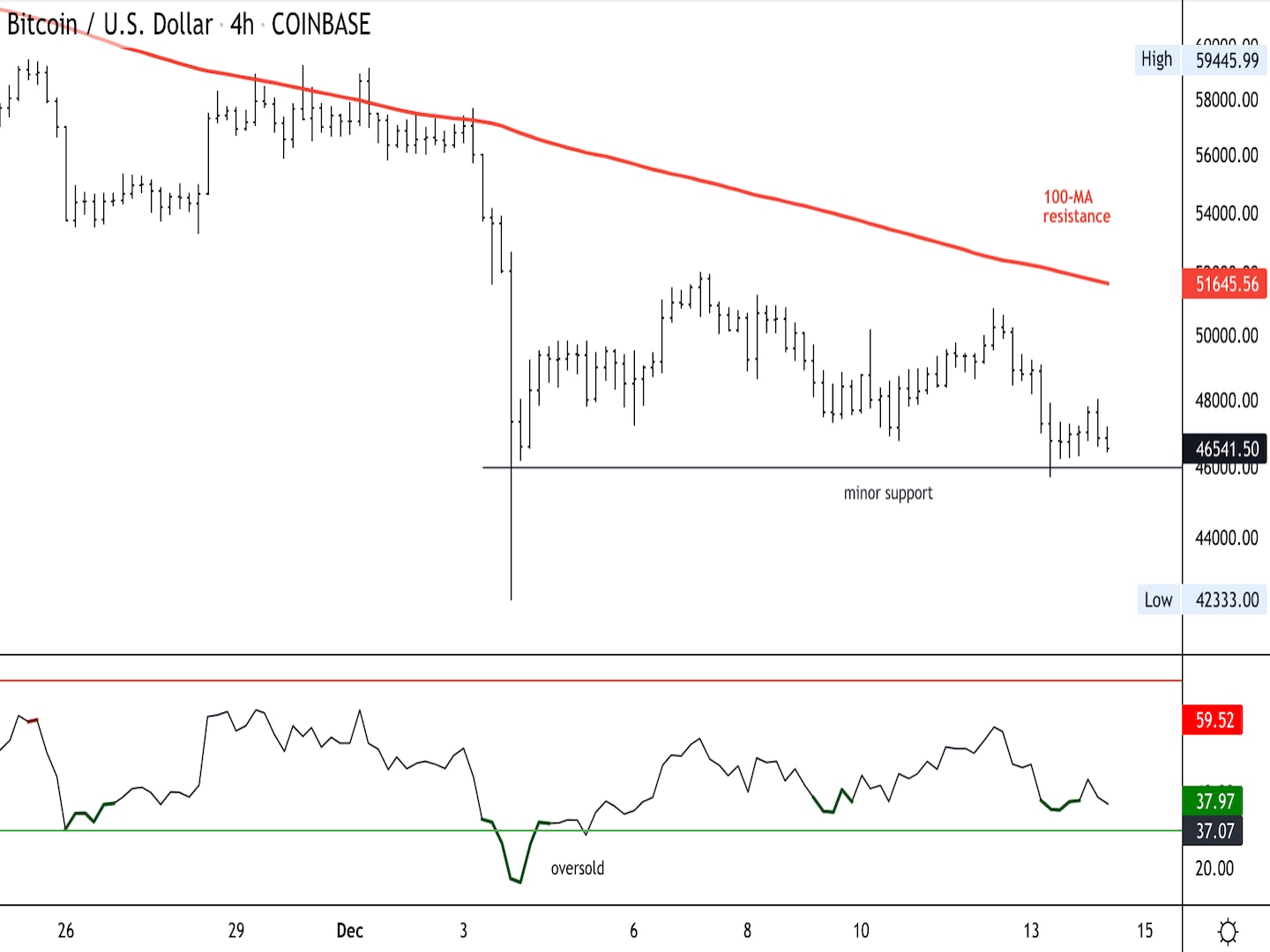 Bitcoin (BTC) held steady around the $46,000 support level as oversold signals appeared on the charts. This means short-term buyers could remain active into the Asia trading day, although upside appears to be limited toward $50,000.

The tight trading range over the past two weeks coincided with slowing price momentum. Typically, trading volume declines when prices move sideways until a decisive breakout or breakdown is realized.

On the daily price chart, initial signs of downside exhaustion have appeared for the first time since July, which preceded a price recovery. Still, these signals are not yet confirmed, especially because multiple oversold readings have not resulted in a meaningful price bounce over the past two weeks.

For now, the intermediate-term uptrend remains weak given the downward sloping 100-period moving average on the four-hour price chart. There is also strong resistance ahead, which could keep sellers in control.

NYDIG Announces $1B Funding Round, Senate Committee on Banking, Housing and Urban Affairs Hosting a Hearing on Stablecoins

“First Mover” hosts speak with Ryan Clements, assistant professor at the University of Calgary Faculty of Law, for his insights into the U.S. Senate hearing on stablecoins. Titan co-founder and co-CEO Clay Gardner provided markets analysis. Plus, Travala CEO Juan Otero shared details of his company’s exponential growth in November.

Institutional Bitcoin Broker NYDIG Valued at $7B in Whopping $1B Funding Round: WestCap is leading what appears to be the largest funding round in crypto history.

FTX Strikes Sponsorship Deal With NBA Team Golden State Warriors: The deal is a multiyear agreement worth about $10 million, according to a report citing people familiar with the matter.

Introducing CoinDesk’s Culture Week: How crypto is changing media and entertainment – and forging its own culture.

Crypto Miners Extend Slump as Bitcoin Price Falls to Lowest Point Since October: Some miners have lost almost 50% of their market capitalization since bitcoin reached its all-time high in November.

Sportswear Giant Nike Purchases NFT Fashion and Collectibles Startup RTFKT: Nike is making a major move into the metaverse with the acquisition of a leading digital apparel player.

How the Economics of Bitcoin and Ethereum Shape Their Cultures: Different cryptocurrency networks will form distinct societies.

Today’s crypto explainer: How to Store Your Bitcoin

Other voices: Who owns the most cryptocurrency? (Financial Times)

“Instead of trying to build a retail crypto exchange that was out competing for customers, we wanted to empower incumbents to be able to offer access to bitcoin in a variety of ways.” (Patrick Sells, chief innovation officer, NYDIG)… “More subtly, crypto itself became culture in 2021. This industry’s ideas affected how people dress, speak and communicate online. Words and phrases like “gm,” “HODL,” “WAGMI” and “to the moon” became part of the lexicon.” (CoinDesk)… “My view of the utility of this industry has expanded a lot.” (Wyoming Sen. Cynthia Lummis)