We made it! 2021 is coming to a close, the U.S. Congress is on vacation, and we very likely won’t have a Christmas Eve President’s Working Group statement again. As we wrap up this year, it’s worth taking a look at what actually happened over the past 12 months.

It’s been a long, strange year. I wanted to revisit the first issue of this newsletter from January as we get close to the end of 2021 and see how the regulatory sector around this industry has developed since then.

Are we any closer to that fabled regulatory clarity for digital assets in the U.S.? I don’t actually know if there’s a real answer to this yet. There are certainly efforts being made to get there, but by and large this year felt like a reinforcing of existing norms rather than truly novel regulatory standards for the industry.

When I started this newsletter, I pointed to what I thought would be some key issues to watch for this year. Let’s see how I did:

The U.S. Securities and Exchange Commission (SEC), Commodity Futures Trading Commission (CFTC) and Office of the Comptroller of the Currency (OCC) will all see a change in leadership. Next year, so will the Federal Reserve.

SEC Chair Gary Gensler has been in office nearly nine months, and while the industry isn’t too thrilled with what he’s done so far, under his watch bitcoin futures exchange-traded funds (ETF) and mutual funds began trading. The SEC is also continuing to investigate projects it believes may have violated federal securities law, such as Terraform Labs and the Mirror Protocol.

Perhaps more intriguingly, Gensler has suggested that Congress enact legislation granting a single federal regulator broad authority over crypto spot markets, positioning the SEC as the appropriate agency to take on this role.

Acting CFTC Chairman Rostin Behnam has similarly suggested that his agency might be the best fit, pointing out that the majority of the market cap for cryptocurrencies listed on U.S. trading platforms comes from commodities (i.e., bitcoin and ether). Gensler’s argument has been that the majority of the cryptocurrencies on trading platforms appear to be securities. They’re not mutually exclusive positions.

The OCC has operated under Acting Comptroller Michael Hsu for most of the year. More on this below.

U.S. President Joe Biden actually nominated Federal Reserve Chairman Jerome Powell to a second term, so we will not be seeing a change in leadership at the central bank. That being said, the Fed is now approaching inflation and the tail end of the second year of the coronavirus pandemic differently than it approached in the first year, so we’ll still have to see how this change in view impacts these broader economic concerns.

The SEC is suing Ripple Labs and two executives on allegations they sold XRP in unregistered securities sales for over seven years, which has implications for companies that didn’t conduct initial coin offerings but may have still sold tokens.

Attorneys for both the SEC and Ripple have spent much of the last year filing administrative proceedings and sorting out issues of discovery. We haven’t actually gotten to the substantive part of the case in court yet, so this remains TBD.

The Financial Crimes Enforcement Network (FinCEN) is considering a number of rules that bring crypto transactions under closer scrutiny.

Remember how 12 months ago the entire industry was laser focused on the proposed FinCEN unhosted wallet rule? Good times.

While FinCEN, a unit of the U.S. Treasury Department, has played a role in addressing the ransomware crisis and has reported an uptick in crimes conducted using cryptocurrency (again, chiefly ransomware related), the wallet rule has dropped out of sight and the agency hasn’t announced any new measures.

The OCC has issued a number of interpretative letters over the past year under an acting head that powerful Democrats on the Financial Services Committee already want overturned.

That being said, the OCC has seemingly stopped granting trust charters to crypto companies, so at most we seem to be in a sort of limbo period as that review continues.

Congress will consider how it can implement new real-time payments services and boost financial inclusion this year, targeting two goals that the crypto community has long discussed. This is a conversation the industry wants to participate in.

I … don’t think this happened? Issues like the bipartisan infrastructure law and the Build Back Better bill seem to have taken up a lot of Congress’s attention. I don’t even remember if FedAccounts actually made a significant appearance during a congressional hearing this year. Certainly not enough to stand out.

Democrats are furious at Republicans who they think helped incite the attempted Capitol insurrection in January, and that could have implications for crypto-friendly legislation spearheaded by representatives who objected to the Electoral College vote.

So a) this fury seems to have died down pretty quickly but b) we haven’t seen votes on almost any kind of crypto-specific legislation, so that’s a wash anyway. We are seeing the tide in Congress potentially shift, though, with (a) hearing(s) focused on largely substantive issues rather than just listing concerns in lieu of conversing with the industry.

The biggest regulatory story in the U.S. probably came in the form of the bipartisan infrastructure bill and its crypto broker tax provision. While that bill is now a law, efforts to modify the broker provision are ongoing.

A similarly big story seems to be the launch of bitcoin futures ETFs, which saw some $1.4 billion in inflow in fairly short order. 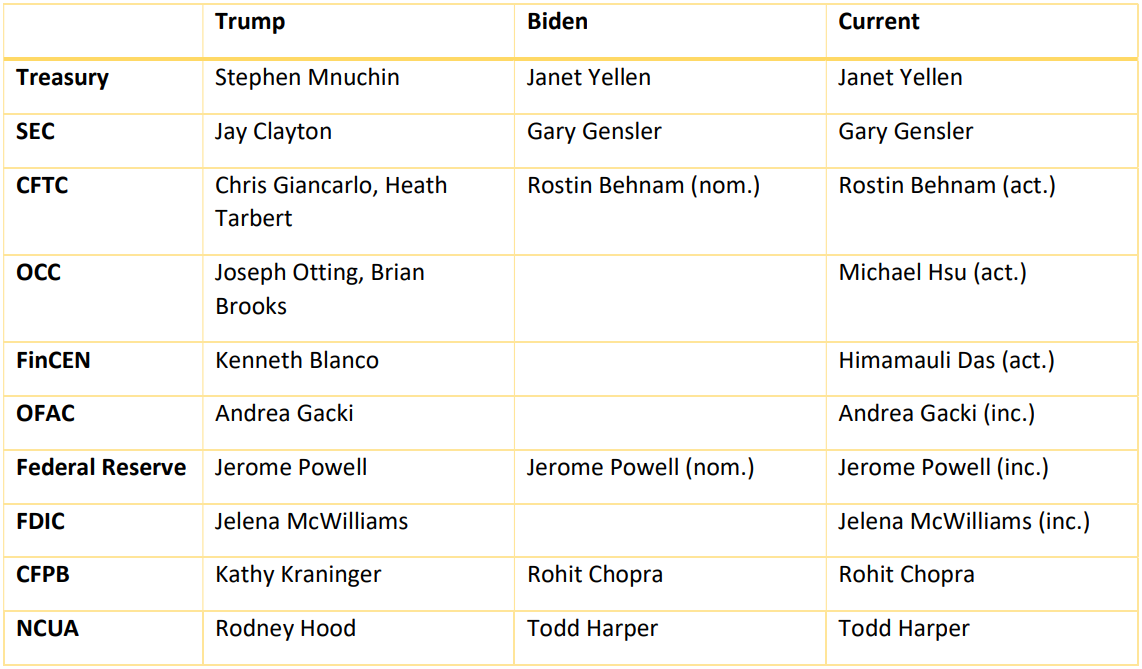 We are nearly at the end of 2021 and I think it’s (hopefully) safe to say we will not have many more updates, if any, to this chart this year.

That being said, earlier this month CFTC Commissioner Dawn Stump announced she does not want to serve another five-year term at the commodities regulator after her term expires in April 2022. It’s unclear when she plans to leave – it could be as soon as April or up to 18 months later (depending on whether the commissioner waits for a successor to be nominated and confirmed by the Senate).

Similarly, SEC Commissioner Elad Roisman announced his intention to depart the securities regulator at the end of January 2022 (although his term doesn’t expire until June 2023).