Hi Market Wrap readers! During the final two weeks of 2021, we’re using this space to recap this year’s most dramatic moments in cryptocurrency markets – and highlight the key lessons from this fast-evolving corner of global finance. Over a series of eight posts that started on Dec. 20 and will run through Thursday, we’ll recap what shook crypto markets this year. (Scroll down for today’s latest crypto-market prices and top gainers/losers.)

On Monday, we showed how some large investors began to cash out of their bitcoin trades in April and May, as prices retreated from the then-all-time-high price of around $65,000. Concerns about rampant speculation and a decline in global money supply growth were some reasons why investors began to jump ship. Then investors became concerned about bitcoin’s environmental footprint, which also caused Tesla to reconsider its involvement in the cryptocurrency. The selling pressure accelerated in May after China banned cryptocurrencies.

It was a wild first half of the year for bitcoin, but by June, the market began to settle down. BTC stabilized at around $30,000 after dropping nearly 50% over the span of a couple months. During that time, traders flocked to alternative cryptocurrencies (altcoins) and non-fungible tokens (NFTs) in hopes of greater profits.

Around the start of the year, multiple altcoins began to outperform bitcoin (BTC), reflecting a strong appetite for risk among investors. The payments token XRP rallied nearly eightfold between January and April, and the prices of many decentralized finance (DeFi) tokens such as Aave’s AAVE token and Uniswap’s UNI also soared.

Even during the broad crypto market sell-off, altcoins began to account for a greater share of the total crypto universe – shrinking bitcoin’s “dominance” in the industry jargon. Many “Ethereum killers,” or competitors in the field of smart contracts blockchains, began to grab the attention of traders – such as Solana, with its SOL token. So-called layer 2 tokens such as MATIC from Polygon, which aims to increase the efficiency of transactions on the Ethereum blockchain, rose nearly twofold in July. 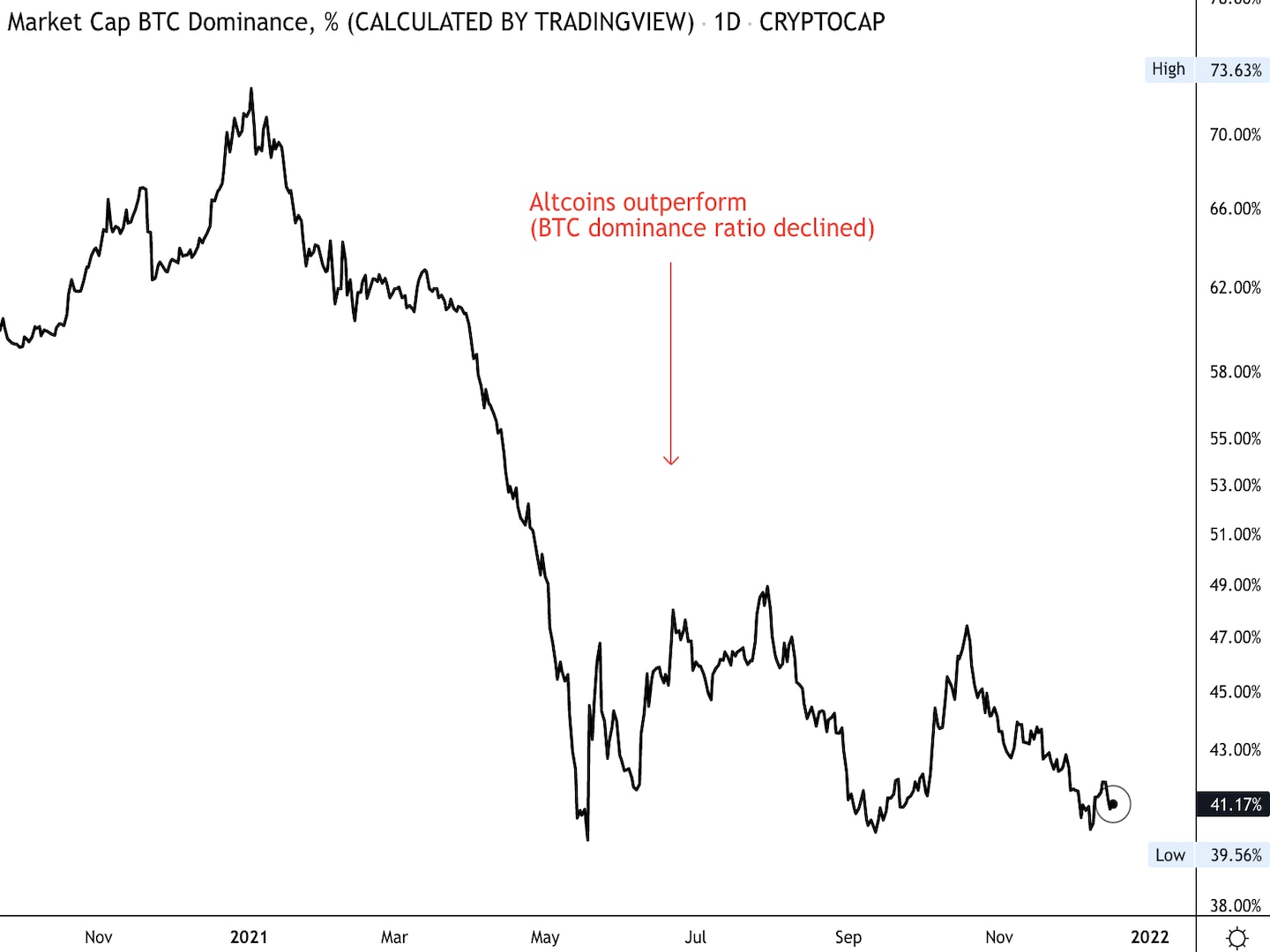 As bitcoin’s price stabilized at around $30,000 in July and August, some traders became bored, literally.

It had been clear since March just how far this year’s crypto craze extended beyond bitcoin, when a piece of digital artwork sold for $69.3 million at a Christie’s auction by crypto artist Beeple. In the wake of breathless headlines in traditional media outlets like the New York Times, the potential riches from selling non-fungible tokens, or NFTs, attracted scores of artists, celebrities and traders seeking additional investments in the crypto market.

.@beeple 's 'The First 5000 Days', the 1st purely digital NFT based artwork offered by a major auction house has sold for $69,346,250, positioning him among the top three most valuable living artists. Major Thanks to @beeple + @makersplaceco. More details to be released shortly

The Bored Apes Yacht Club became the second-most popular NFT collection by total trade volume behind CryptoPunks, CoinDesk’s Eli Tan wrote in August. At that time, the “floor price” for Bored Ape Yacht Club NFTs – the cheapest available on the open market – was 48.8 ETH, or $165,578. (By the end of the year, it would rise even further, to about $240,500.)

Speculation moves in cycles. Crypto traders began the year in full buying mode and then price declines encouraged some profit-taking as regulatory risks unfolded. The speculative wave had its ups and downs, but traders were able to find opportunities in the alternative crypto market as bitcoin began to lose its relative dominance.

In the next episode, we’ll show how bitcoin’s price broke out of a two month-long sideways range as El Salvador came to the rescue.

Here are the biggest gainers and losers among the CoinDesk 20 digital assets, over the past 24 hours.

There are no gainers in CoinDesk 20 today.