Several FDIC-insured banks uniting to put out a stablecoin may seem to address lingering worries about this critical part of the cryptocurrency ecosystem. However, the details – including whether the agency can insure the stablecoin’s owners’ deposits – remain to be fleshed out.

On Wednesday, a group of U.S. banks, including FirstBank of Nashville, Synovus, New York Community Bank (NYCB), and Sterling National Bank, announced plans to offer its own stablecoin, called USDF, in an effort to bring stablecoins to the everyday banking client.

All the banks are institutions backed by the Federal Deposit Insurance Corp. (FDIC), a key regulator in the industry, which is why the stablecoin is promoted as “a more secure option for transacting on blockchain,” according to the press release.

FDIC-insured banks qualify for pass-through insurance, which protects bank depositors against losses of up to $250,000 in case of a bank failure.

“We are designing the network to allow for FDIC insurance to apply to the deposits underlying USDF, up to the $250K limit,” Andrew Kaplan, NYCB chief digital and banking as a service officer, told CoinDesk.

Figure co-founder Mike Cagney tweeted that “USDF is a fungible claim to fiat to any member bank. USDF can only be delivered to a KYC’d wallet, and such movement is visible on the public chain. This combination satisfies the primary regulatory objectives.” 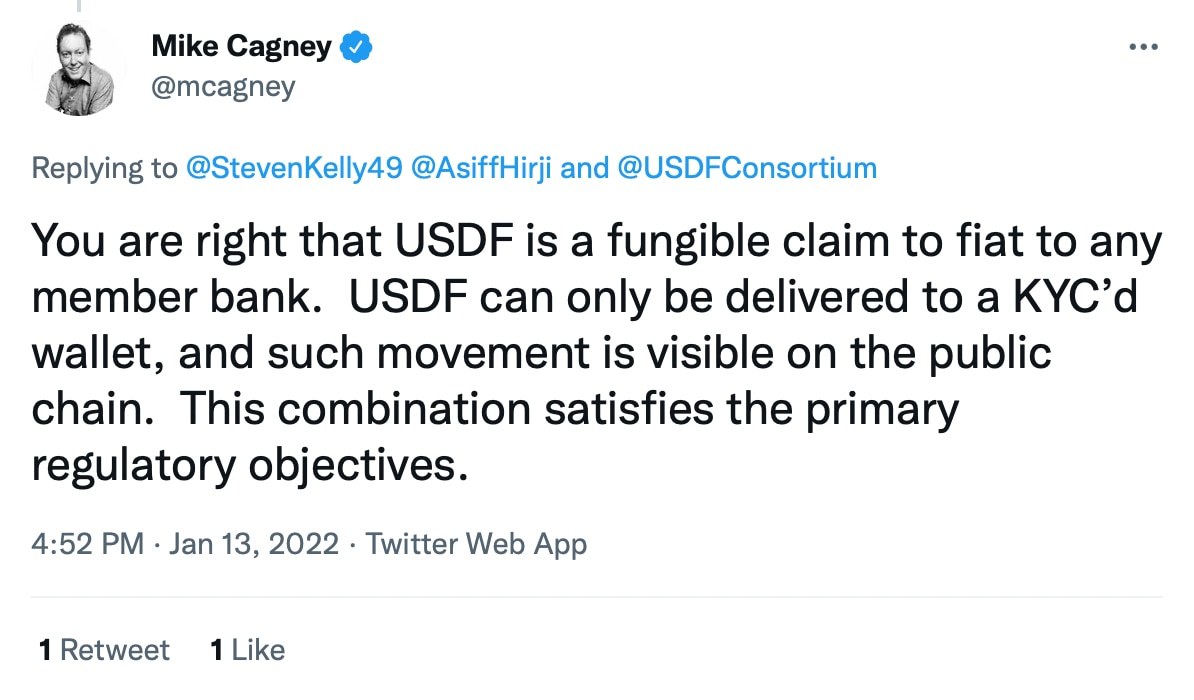 Yet, neither Synovus, one of the banks that is part of the consortium, nor the FDIC could confirm whether the actual token holder in this case would be subject to the pass-through insurance and therefore, protected against losses of up to $250,000.

In October, sources told CoinDesk that the FDIC has been considering whether stablecoin reserves would qualify for such insurance, but the matter still seems to be unsolved.

“With respect to the insurability of funds and all of the future use cases, I don’t want to speculate on that right now,” Synovus Head of Innovation and USDF Consortium board member Matt Maxey said Thursday.

Similarly, a spokesperson for the FDIC told CoinDesk Thursday that it is “too early to be answering questions about whether or not stablecoins are FDIC insurable.”

The consortium has been in dialogue with several regulatory bodies, including the Office of the Comptroller of the Currency, the Federal Reserve, and the FDIC, since before the announcement, Wade Perry, chief administration officer at FirstBank said on CoinDesk TV. However, he did not respond to a question about the insurability of UDSF, either.

The announcement was released on the same day that Federal Reserve Chair Jerome Powell testified in front of Congress as part of his renomination hearing. He addressed stablecoin policy, saying that he had no intention of banning private stablecoins even if the U.S. created a central bank digital currency (CBDC).

“I would say the timing is more based on the fact that with the dialogue we’ve had with regulators … and the functionality of this and the plan to work within boundaries as we gained acceptance from those folks, we felt comfortable going forward,” Perry said.